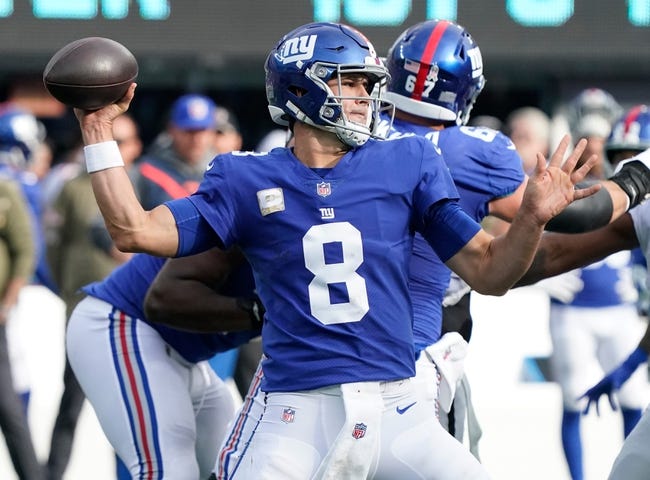 The New York Giants and Tampa Bay Buccaneers face off on Monday Night Football at Raymond James Stadium. When these two teams last faced off last year, the Buccaneers won 25-23.

The New York GIants come into this game with a 3-6 record overall and they have gone 5-4 against the spread. The Giants are coming off a bye week, but in the previous game against the Las Vegas Raiders they were able to win 23-16. The GIants offense has been a bit inconsistent with their offense, and it’s going to need to be good in this game. The Giants are averaging 19.9 points per game while their defense is giving up 24 points per game. Daniel Jones has shown flashes at times having thrown for 2,059 yards, eight touchdowns, and five interceptions. Jones has also rushed for 258 yards and two touchdowns. The Giants are expected to have Saquon Barkley for this game which is a big boost for the team.

On the other side of this matchup is the Tampa Bay Buccaneers who sit with a 6-3 record overall, but they are coming off a loss in their last game .Tampa Bay could only put up 19 points, and the defense gave up 29 points to Washington. The Buccaneers are averaging 31 points while their defense has given up 23.6 points per game. Under center for the Buccaneers is Tom Brady who has thrown for 2,870 yards, 27 touchdowns, and seven interceptions. One big question for the Buccaneers is if Rob Gronkowski is going to be able to go in this game.

When these two teams have faced off the Giants have covered the spread, and it’s going happen again in this game. I expect Daniel Jones is going to find success, and he will keep the Giants close. Back the Giants against the spread.