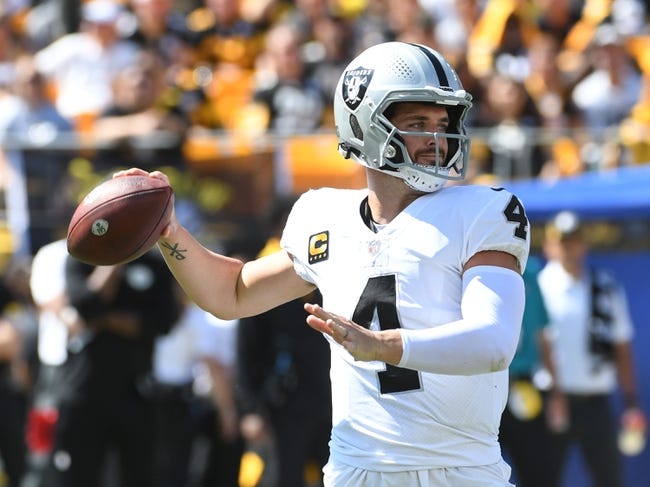 The Las Vegas Raiders and Los Angeles Chargers face off on Monday night football to close out Week 4 of the NFL season. When these two last faced off in December, the Chargers won 30-27 in overtime.

The Las Vegas Raiders have been strong to start the season winning their first three games. The Miami Dolphins almost made a comeback late, but the Raiders hit a game-winning field goal in overtime to get the job done. The biggest strength of this team has been the offense, and Derek Carr has been the reason why. Carr has thrown for 1,203 yards, six touchdowns, and two interceptions. In the backfield, the starter is Josh Jacobs, but he is questionable for this game. Peyton Barber was a difference-maker in the last game rushing 23 times for 111 yards and a touchdown.. Even if Jacobs is back, it wouldn’t be shocking if Barber still had a big role. On defense, the Raiders have had some issues giving up at least 27 points in two of the three games.

On the other side of this matchup is the Chargers who sit with a 2-1 record, and in the last game against the Kansas City Chiefs, they won 30-24. The Chargers scored 16 points in the 4th quarter to seal the victory. On the season, Justin Herbert has thrown for 956 yards, six touchdowns, and three interceptions. Austin Ekeler is having a big year rushing for 166 yards and a touchdown, He has also caught 15 passes for 113 yards and a touchdown. Mike Williams has 295 receiving yards and Keenan Allen has 258 yards. The one game the Chargers lost was against the Cowboys, and the offense only scored 17 points.

Derek Carr has been impressive this season, and there is no reason he won’t find success again in this game. Patrick Mahomes threw for three touchdowns in the last game against the Chargers, and Carr will find similar success. The Raiders are getting too many points, and they will cover the spread. I am also throwing some money on the Raiders money line.