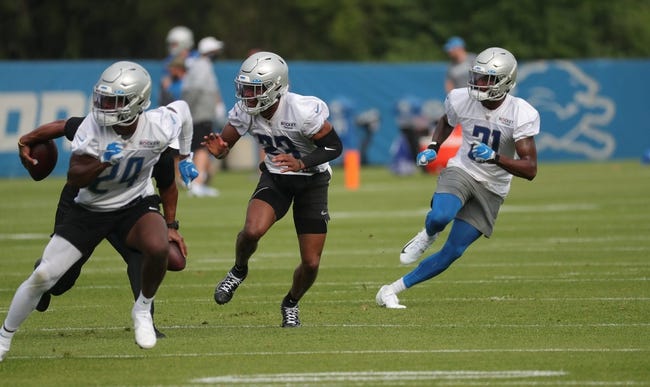 The San Francisco 49ers face the Detroit Lions on Sunday, September 12th, at Ford Field for a Week 1 NFL contest.

The San Francisco 49ers were the NFC Champions in 2019 and reached the Super Bowl for the first time since 2012. Then, in 2020, the 49ers dealt with various injuries and an overwhelming underperformance from many positions to finish the year 6-10. The 49ers are ready to bounce back from a very disappointing season and have a lot to be excited for in 2021. For starters, at quarterback Jimmy Garoppolo will be the starter but 1st-round pick Trey Lance will be ready to go as a backup. The 49ers' defense is healthy and will look to be the force it was in 2019. During this year's preseason, the 49ers went 2-1 with wins over the Raiders and Chargers and a loss to the Kansas City Chiefs. Both Lance and Garoppolo were busy during the preseason and it is expected that both play during the regular season as well.

The Detroit Lions finished the regular season with a 5-11 record as it was another disappointing campaign. The Lions fired head coach Matt Patricia and hired their new head coach in Dan Campbell. Former Rams starter quarterback, Jared Goff, was acquired by the Lions in a trade with the LA and now Goff is set to be the starter in Detroit. The Lions addressed their offensive line needs with the drafting of Penei Sewell in the first round. During the preseason, the Lions did not look very sharp as they lost all three games to playoff teams from last year in the Bills, Steelers, and Colts. The expectations are low for Detroit but the Lions will look to be a surprise in the NFC North nonetheless.

The last time these two teams faced each other was in 2018 in which the 49ers defeated the Lions by the final score of 30-27.

The 49ers are a 7.5-point favorite and the total is set at 45. We have seen plenty of Week 1 upsets in the NFL in recent years and although I do not think the Lions win this game outright, I do think the Lions cover. This is a case of just too many points in my opinion, as I am not a believer in Garoppolo as the starting quarterback and think the Lions can catch a backdoor because of it.