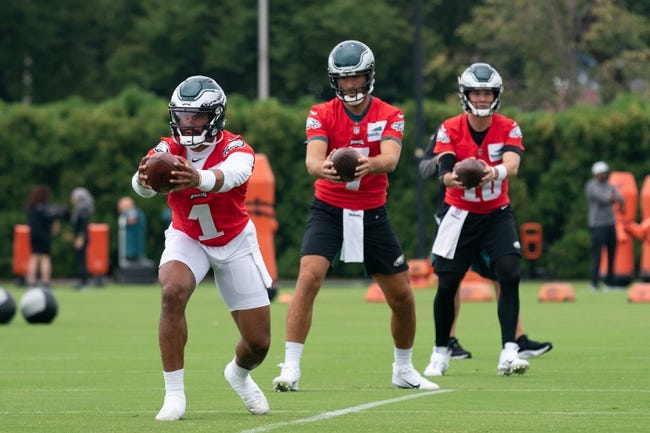 The Pittsburgh Steelers face the Philadelphia Eagles on Thursday, August 12th for a Week 1 Preseason matchup at Lincoln Financial Field.

The Pittsburgh Steelers were able to play in the Hall of Fame game last week against the Dallas Cowboys. The Steelers won that game by the final score of 16-3, as it was a defensive battle from the start. The Steelers' leading passer was Mason Rudolph, who many say is the favorite to be the backup to Ben Roethlisberger when the season starts. Dwayne Haskins and Joshua Dobbs also saw the field, and Dobbs was responsible for the only passing touchdown of the game. Despite the win, the Steelers only accumulated a total of 250 yards, while the Cowboys had 347 under their belt. Wide receiver, Chase Claypool, was able to grab three receptions for 62 yards but was banged up at the end of one of his catches. It does not look to be a serious injury and Claypool is still on track to be a major player in the Steelers 2021 offense.

For the Philadelphia Eagles, there are a lot of question marks. This will be the first full season with Jalen Hurts at quarterback, but the backup job is still a very important part of the team's preseason. Both Joe Flacco and Nick Mullens are on the preseason depth chart and will be competing for that backup job. These are two quarterbacks that have a good amount of NFL experience and should help the Eagles' chances this preseason. The Eagles are currently a bit thin at the wide receiver position, but Thursday's game will be the first for first-round pick, DeVonta Smith. Smith won the Heisman Trophy at Alabama in 2020 and he was a big part of that Alabama National Title team. The Eagles are once again loaded at running back, as currently Miles Sanders, Jordan Howard, Boston Scott, and Kerryon Johnson are a part of the roster.

Although the Eagles are more than likely going to struggle this season in an up-for-grabs NFC East, it does look like they have a solid foundation for their preseason contests. I give the edge on defense to the Steelers here but the Eagles have plenty of playmakers on offense and the better quarterback trio in my opinion. I will take the Eagles to win this game.