The Los Angeles Rams head into the postseason more than likely without their starting quarterback in Jared Goff. Goff has not yet been ruled out officially, so his status will remain imperative to this contest. The Rams had no problems without Goff in their Week 17 win over their NFC West rivals in the Arizona Cardinals. The Rams defeated the Cards by the final score of 18-7 at home. With the win, the Rams clinched their second playoff appearance in three years. The last time the Rams were in the playoffs they made it all the way to the Super Bowl, an eventual loss to Tom Brady's Patriots. The Rams rely on their tenacious defense, a defense that allowed the fewest amount of yards per game (281.9) and allowed the fewest amount of points per game as well (18.5). The Rams' offense was a bit below-average, but it did not need to be stellar for the team to have success. The Rams ended the regular season with a 10-6 record and owned impressive victories over teams like the Seahawks, Buccaneers, and the Cardinals (twice).

The Seattle Seahawks ended their regular season with a close 26-23 win over the San Francisco 49ers on the road (in Arizona). The Seahawks ended the regular season with four straight wins over the Jets, Washington Football Team, Giants, and Niners. The Seahawks own a 12-4 record and will host a playoff game for the first time since the 2016 season. The Seahawks' offense was ranked 8th in the league in terms of points per game. When it came to yards per game, the Seahawks were around the middle of the pack on offense. Defensively, the Seahawks started the season poorly on the defensive side but ended the year on a heater. The Seahawks allowed 20 or fewer points in four of their last five games to end the season. For Seattle, it is Super Bowl or bust, and a win here is necessary for the Hawks organization.

The Seahawks are 4.5-point favorites and the total is set at 42.5. If Goff is ruled out for this game, expect that line to climb more towards the 5 or 6 range. The sportsbooks know that the Rams do not rely on Goff as much as they do their defense. Unfortunately for Los Angeles, I think the Seahawks are playing too good of football for a banged-up team like the Rams to get in their way. I like the Seahawks to roll in this one. 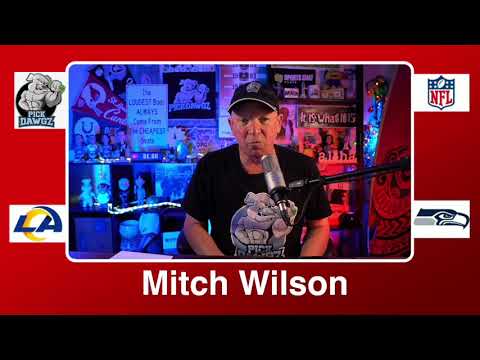