The Tennessee Titans and Houston Texans face off on Sunday in a Week 17 NFL showdown at NRG Stadium.

The Tennessee Titans had a chance to wrap up the AFC South title against the Packers last Sunday night but the snow was too much and they were defeated. The Titans can clinch this title with a win or a loss by the Ravens, Dolphins, or Colts. It was snowing in the Titans game against the Packers and it was clear that the snow had a big impact on them with the offense only managing 14 points. On the season the Titans are averaging 30 points per game while their defense is giving up 26.7 points per game. It seemed that Derrick Henry had a down game against the Packers but he still rushed for 98 yards. On the season, Henry has rushed for 1,777 yards and 15 touchdowns. Quarterback Ryan Tannehill has thrown for 3603 yards, 32 touchdowns, and seven interceptions.

On the other side of this matchup is the Houston Texans who have really struggled this year and coming into this game they have lost four games in a row. The Texans have also failed to cover the spread in three of those four games. In the last game against Cincinnati, they were 7.5 point favorites but were defeated by six points. On the season, Houston is averaging 23.1 points per game while their defense is giving up 28.2 points per game. Even though the Texans haven’t won as many games as hoped, this is a team that has still had a big season from Deshaun Watson. On the season, Watson has thrown for 4458 yards, 30 touchdowns, and six interceptions.

The Titans have more to play for, but Watson has made it clear he is going to play in this game, and i think he will have a big game. The Titans should still come away with the win, but this is too many points, back the Texans against the spread. 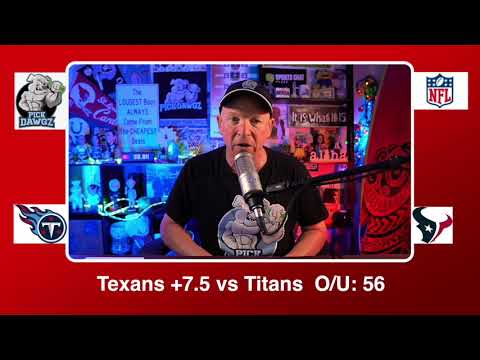