The Los Angeles Chargers will travel to Arrowhead Stadium to take on the Kansas City Chiefs this Sunday afternoon in NFL action.

The Los Angels Charges won their 3rd straight game and improved to 6-9 on the season after defeating the Denver Broncos, 19-16, this past Sunday. Los Angeles allowed Denver to fight back from a 16-3 4th quarter deficit to tie it up late, however, the Chargers were able to secure the victory after a game-winning 37-yard FG by Michael Badgley with just :41 seconds left in the game. Los Angeles was outgained by Denver by a 396-316 margin, however, won the turnover battle by a 2-0 margin in the victory. Leading the way for the Chargers was QB Justin Herbert who completed 21 of 33 passes for 253 yards & 1 TD.

The Kansas City Chiefs won their 10th straight game and improved to 14-1 on the season after defeating the Atlanta Falcons, 17-14, this past Sunday. Kansas City had a surprisingly difficult time getting their offense rolling against the Falcons, however, took a late lead on a 25-yard TD reception by Demarcus Roninson and hung on late after the Falcons Younghoe Koo missed a game-tying 39-yd FG with just :14 seconds left in the game. Leading the way for the Chiefs was TE Travis Kelce who had 7 receptions for 98 yards & 1 TD.

Kansas City has already clinched the top-seed in the AFC and at this point, you have to imagine that the majority of their star players will be sitting in this one. The line has yet to be released, however, as I still expect the Charges to get a few points even if Kansas City sits their starts, my initial thoughts is to take the Chargers who should have plenty of success generating offense behind Justin Herbert & Austin Ekeler. Check back later for my official pick once the line is released. Good Luck!

Update (12/30) - With the expectation of many of the best players for KC sitting out, it's not surprising to see the Chargers favored in this one. I'm keeping with my initial thoughts from earlier this week and going to roll with Los Angeles to cover this spread. Good Luck! 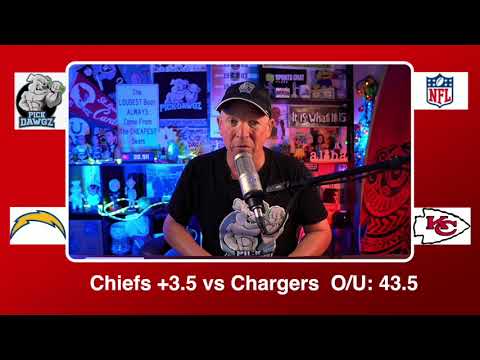