The Arizona Cardinals are coming off a 20-12 loss to the San Francisco 49ers in their last game on December 26th in Week 16. The Cardinals are now on the outside looking in when it comes to the NFC playoff picture, as the Chicago Bears currently own the seventh seed (the final Wild Card spot). The Cardinals have now lost three of their last five games overall, putting Arizona at 8-7 on the year. Kyler Murray was not sharp in his last game against the 49ers, throwing 31-50 for 247 yards and one interception. The Cardinals have scored 26.9 points per game and have earned 406.6 total yards of offense per contest as well. The Cardinals have also allowed 23.3 points per game and have conceded 374.4 total yards of offense per contest as well.

The Los Angeles Rams are coming off a 20-9 loss to the Seattle Seahawks in their last game on December 27th in Week 16. The Rams have not clinched a spot in the playoff yet, as that depends on this game. The Rams would love to defeat their NFC West rivals to not only clinch a berth but also eliminate the Cards from contention. The Rams were in a great spot to make the postseason, but a loss to the Jets is inexcusable and could wind up costing the Rams their chance at a Super Bowl. The Rams score 23.6 points per game and earn 390.7 total yards of offense per contest as well. The Rams allow 19.3 points per game and concede 308.1 total yards of offense to their opponents as well.

The Rams open as 1.5-point favorites and the total is set at 42.5. I think the Rams are going to win this game by at least a field goal, as although this has been a season full of major improvements for the Cardinals, I do not think they have the talent to defeat LA here. I like the Rams pass-rush to make Kyler Murray's life more difficult and I think the Rams clinch a playoff spot with a win at home. 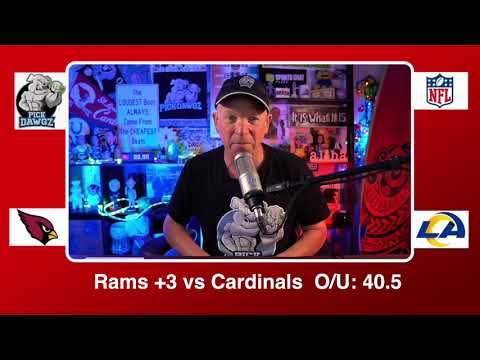