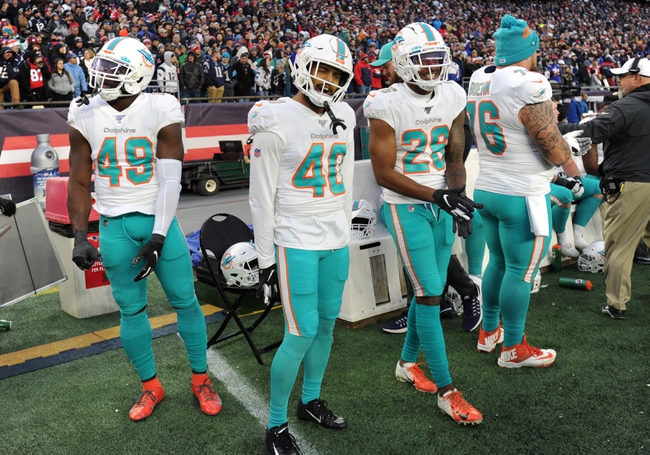 The Miami Dolphins were not projected to do well coming into the 2019 season. Many people had them finishing dead last in the league, so I guess finishing ahead of some teams is a positive for the organization, but certainly not in terms of the 2020 NFL Draft. An upset over their division rival New England Patriots in Foxborough in Week 17 does not hurt, though!

The Dolphins have three first-round picks, two second-round picks, a third, fourth, two fifths, two sixths and one seventh-round pick as well. Making this draft one of the most important in franchise history.

The Dolphins simply did not have the talent as most, if not all the other NFL teams in the league. With QB limbo including Josh Rosen and Ryan Fitzpatrick (Fitzmagic to some), the Dolphins were inconsistent offensively. The passing game with Fitzpatrick had its moments, but overall it was not productive enough to be competitive. The running game for Miami was absolutely non-existent, as they were 32nd in the league, and averaged 72.3 rushing yards per game.

The Dolphin’s Defense, as well, was not where it needed to be in order to win games. They were ranked dead last, 32nd in the league in points given up per game. Both the rush and the pass defense was well below average, and no team can win games when they are giving up more than 30 points a contest.

The Dolphins have many options when they go into the draft, which is a nice way to say that the roster is terrible from top to bottom. The Fins can make the obvious choice in the first round and take Tua Tagovailoa (Alabama) just to address their hole at the QB position. They could also reasonably go a different route and take OL Andrew Thomas (Georgia), who would be a necessary piece for that abysmal offensive line.

With their other first-round picks, the Dolphins could decide to take a chance on QB like Jordan Love, who has the talent, but his draft stock has been falling after a shaky end to his career at Utah State. If Tua was Miami’s pick at the beginning of the round, the Dolphins could grab OL Josh Jones (Houston) in one of the later picks of the first round. Also, as stated before, the defense needs help. Guys like CB A.J. Epensa (Iowa) or LB Kenneth Murray (Oklahoma) would be solid choices for a Miami team that is just looking for young, promising talent on both sides of the ball.

Again, this draft is imperative for Miami. They need to use all twelve of their draft picks to try and rebuild an extremely thin roster and franchise. The future does not look terrible for Miami, but they have to make this draft count.