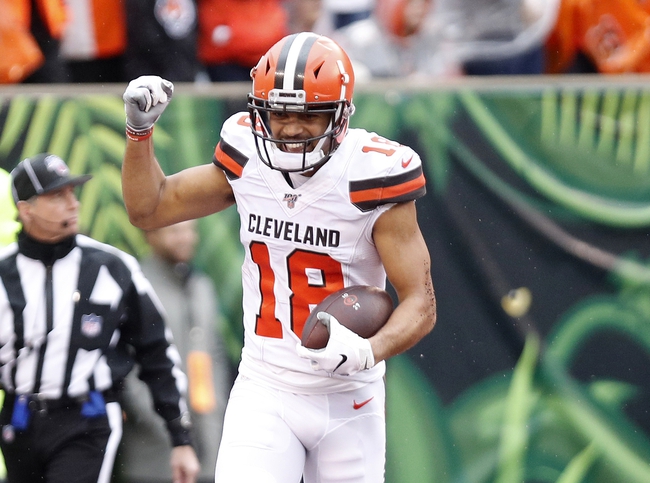 The Cleveland Browns may have had the most disappointing season in the NFL, which is a statement Browns fans have been used to for a while. The Browns had so many goals and high hopes for the 2019 season, yet unfortunately, they struggled once again. Bad coaching (which led to the firing of HC Freddie Kitchens), underwhelming performances by QB Baker Mayfield, WR Odell Beckham Jr among others, and just completely dysfunctional football led to the demise of the Browns in 2019.

The Browns do not have a fifth or sixth-round pick, they own two third-round picks, and have their first, second, fourth, and seventh-round picks as well. This is a very important draft for a Cleveland team that has a lot of talent on paper.

The Browns on defense were below average, despite big-name players like Myles Garrett (who was suspended after the Browns season was just about over), Olivier Vernon, and Denzel Ward. They gave up 24.6 points per game, which is far too many for a defense with the talent level they have. They had the 30th ranked rushing defense, giving up 144.7 yards per game on the ground. Their pass defense was much better, ranked 7th in the league, only giving up 216.9 yards per game.

The Browns offense was inconsistent at best. Although Nick Chubb had a great season, it was merely because of his talent level, and not thanks to the offensive line that struggled incredibly throughout the season. Baker Mayfield was not himself because of the amount of pressure he withstood from opposing defenses, the Browns were near the bottom of the league in passing yards per game with only 222.1 per game. The Browns have a lot of weapons, including Chubb, Kareem Hunt, OBJ, and Jarvis Landry. With an improved offensive line, Mayfield and company will be able to breath easier, and play to their full ability. If OT Andrew Thomas (Georgia) is available for Cleveland when they are on the clock, I think it is a no-brainer decision to draft him. If OT Tristin Wirfs (Iowa) is also on the big board, the Browns may decide to go his route as well.

In the second and third rounds, the Browns need to address their defensive line and linebacker positions, which struggled badly. An option they could go with if available would be LB/EDGE Julian Okwara (Notre Dame), who could provide versatility for Cleveland. With two picks in the third round, the Browns can take two talented pieces on both the offensive and defensive lines. OG Netane Muti (Fresno State), OG Logan Stenberg (Kentucky), and DT James Lynch (Baylor) are all viable options.

As for Cleveland’s future, the Browns still have a very talented roster. They obviously have gaping holes in some positions mentioned before but could address those in the draft, free agency, and the rest of the offseason via trade. That could be enough for the Browns to be very competitive next season, and many seasons afterward. The coaching hire for Cleveland will also determine their 2020 and future as well.