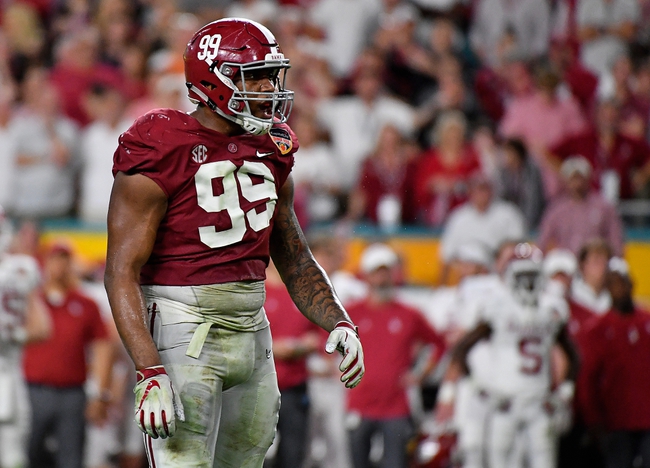 Defensive lineman, Raekwon Davis is projected to be a second or third-round draft pick. Coming out of high school, Davis was a four-star recruit in the class of 2016. He was the fifth-ranked player out of Mississippi.

College Career: There was some concern before his Freshman season that he wouldn’t be academically eligible to play for the Alabama Crimson Tide but he was cleared and has been a key player for the team. As a freshman, he played in only seven games as a reserve. As a sophomore is when he really took off. He led the team with 8.5 tackles and that was enough to earn All-SEC honors. During his junior and senior year his stats dropped a bit, but as a senior he still did enough to earn second-team all-conference.

Pros: For Davis, it’s all about the physical attribute.. He is a player with great length and long arms that are going to help him at the next round. Against the run he does a great job of filling the gap and making life tough on the opponents. He is also a very athletic player and he knows how to use it. Davis does a great job of getting off the snap and usually has a hand up on the offensive line. He also has an elite swim move that gives opposing teams a lot of problems.

Cons: He is a taller defender and he needs to do a better job of getting technical with his game. At times the former Crimson Tide standout is a bit sloppy. He also at times could do a better job of finishing plays. There also has to be some real concern about the way his production fell off the last couple of years against the Crimson Tide.

Projected Teams: Davis is a bit of a risky pick, but if he can find success like he did as a Sophomore, he could be a real standout in the NFL. The Los Angeles Chargers are a team that need defensive help and with a third-round pick they could afford for him to sit for a year or two.

The Jaguars also need some help on defense, and adding Davis would make them better.