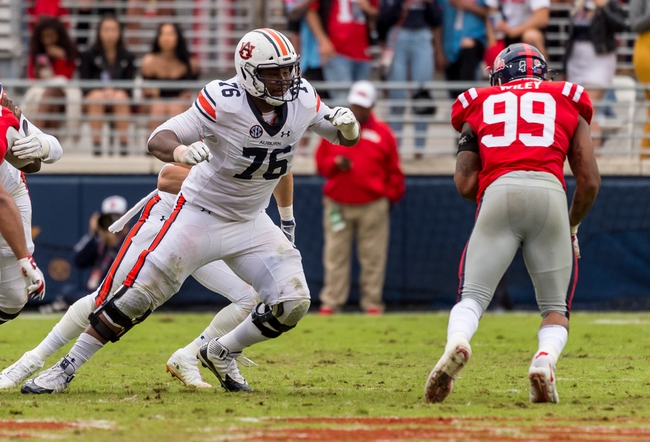 Offensive tackle Prince Tega Wanogho is projected to be a second-round pick. Coming out of high school Wanogho was a four-star recruit in the class of 2015. He was the fourth-ranked player in the state of Alabama. Wanogho grew up in Nigeria and he got a lot start on playing football.

College Career: As a redshirt freshman with the Auburn Tigers, he didn’t play a ton but he did get in ten games as a reserve. In 2017 he made seven starts at left tackle, and he started to show flashes of just how good he could be. In 2018 he started all 13 games at left tackle.

During his senior year, he made 12 starts at left tackle, but he did receive a medical red flag at the Senior Bowl.

Pros: Wanogho played basketball growing up, and you can see it with his game. He is very athletic, and that really shows with his pass protection. He is still raw, but he has a good understanding with the game of football, just needs to work on the little things. He isn’t a great run blocker yet, but that is something that can come with time. He might be a project, but this could be one of the steals of the draft if they are

Cons: His lower body needs to have more strength added to it, but that can happen in a couple of years in the NFL weight room. He does a good job of getting his hands in the right place, but his hands don’t always stay locked on, and that is a problem. At times he also gives up on plays and that lets his opponent on the play.

Projected Teams: The Los Angeles Chargers need offensive line help and especially if they draft a quarterback they need to keep him upright. It might take a year or two until he was ready in the NFL, but Wanogho would be a perfect addition to the team.

The Minnesota Vikings are another team that needs offensive line help, and developing Wanogho would be a great move.

The pick in this article is the opinion of the writer, not a PickDawgz site consensus.
Previous Pick
Raekwon Davis 2020 NFL Draft Profile, Pros, Cons, and Projected Teams
Next Pick
Pittsburgh Steelers 2020 Win Total- NFL Picks and Predictions