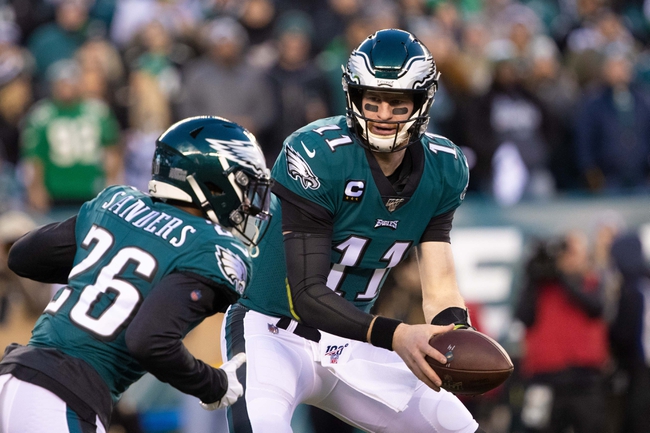 Carson Wentz had an impressive season statistics wise, after throwing for 4,039 yards, while throwing 27 touchdowns and 7 interceptions.  Miles Sanders rushed for 818 yards and 3 touchdowns, while Jordan Howard found the end zone 6 times.  However, Howard will not return as he is on the Dolphins, therefore Sanders should see even more touches.  Tight end Zach Ertz has been a staple in the passing game and 2019 was no different.  Ertz reeled in 88 receptions for 916 yards and 6 touchdowns.  Dallas Goedert registered 607 yards receiving via 58 receptions, while finding the end zone 5 times.  Sanders was also a vital part of the passing game.

The Eagles totaled 43 sacks and 11 interceptions, while forcing 15 fumbles.  Philadelphia did lose their leading tackler from a year ago, as Malcolm Jenkins went back to his previous team, the Saints.  Defensive end Brandon Graham recorded 8.5 sacks, which led the team.  Ronald Darby collected 2 interceptions and 11 pass break ups in the secondary, but he has left for an in division foe.  Darby will be roaming the secondary for the Redskins during 2020.

When looking at the Eagles scheduled opponents for the 2020 season, Philadelphia has a tough schedule outside the division.  Philadelphia has road games at: Arizona, Green Bay, Pittsburgh, and San Francisco.  The Eagles will also play host to: Los Angeles Rams, Seattle, Baltimore, and New Orleans.

The projected win total is set for 9.5 wins, and looking at the schedule, I’m not exactly confident in the over.  The Eagles lost two of their better secondary players in the offseason.  Seeing that the Eagles play against 5 teams outside of the division that made the playoffs, plus a game at Pittsburgh, I’m going to take the under.  The Eagles should still be able to control the NFC East, but will struggle outside of the division.