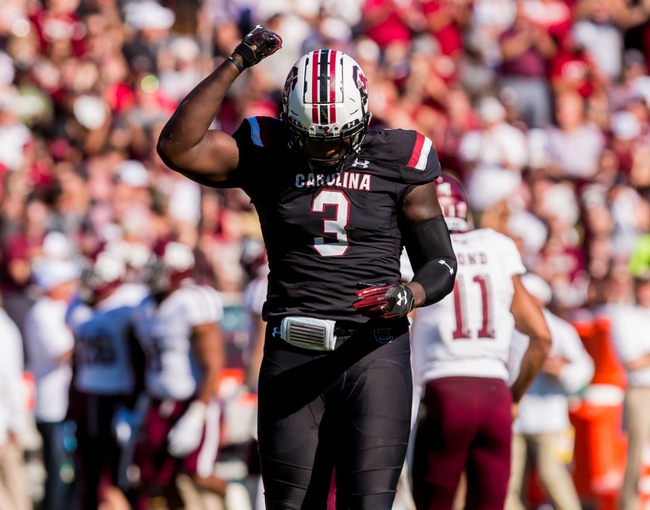 Defensive tackle Javon Kinlaw is projected to be a first-round pick in the 2020 draft. Coming out of Junior college, Kinlaw was a four-star recruit in the class of 2017. He was the third-ranked player in South Carolina.

College Career: Kinlaw played his first season at Jones County Junior College before joining the South Carolina Gamecocks. He lost 40 points when he got on campus, and Kinlaw was a standout playing in all 13 games putting up 20 tackles and one blocked kick. In 2018 Kinlaw started 12 games and was named the team’s defensive MVP. As a senior, he was named a first-team All-American. The stats didn’t match just how dominant he was in 2019 because there was always extra attention on him.

Pros: Kinlaw is speedy, and gets off the ball incredibly fast. When he is over the center, the center better be ready because he is coming quick. He has also gotten a lot strong during college, and that is going to help him at the next level. He also does a good job with his hands to control the offensive lineman. Kinlaw is also good laterly and that helps him move up and down the line of scrimmage.

Cons: Kinlaw could get a little smarter with his football IQ as he adjusts to the next level. Sometimes he gets too far up the field and that opens up run lanes for running backs. He also has issues getting off double teams, and that hurt his production during his senior season. At times he also gets his pad level up a little too high. Has dealt with hip injuries and knee injuries and that could be a cause for concern. j

Projected Teams: The Carolina Panthers need help on the defensive side of the ball and bringing in a pass rusher like Kinlaw would make a whole lot of sense. The Jacksonville Jaguars are another team that needs defensive line help, and Kinlaw could be a steal. He has the potential to be the best pass rusher in the draft if he can stay healthy.

The pick in this article is the opinion of the writer, not a PickDawgz site consensus.
Previous Pick
Cleveland Browns 2020 Win Total- NFL Picks and Predictions
Next Pick
Yetur Gross-Matos 2020 NFL Draft Profile, Pros, Cons, and Projected Teams