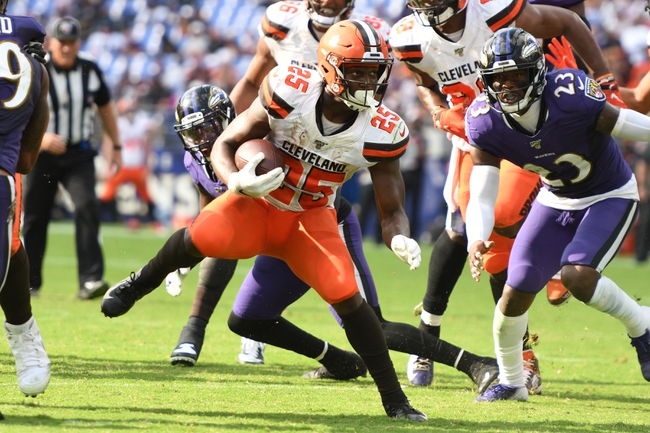 The Cleveland Browns were led on offense by running back Nick Chubb.  Chubb rushed for 1,494 yards and 8 touchdowns. Baker Mayfield struggled during the 2019 season, passing for 3,827 yards, while throwing 22 touchdowns and 21 interceptions.  Jarvis Landry did have a solid season receiving, hauling in 83 receptions for 1,174 yards and 6 touchdowns. Odell Beckham Jr. reeled in 74 receptions for over 1,000 yards. One key addition the Browns made on offense was signing tight end Austin Hooper.  Hooper had an impressive season with Atlanta, hauling in 75 receptions for 787 yards and 6 touchdowns. The Browns also signed offensive lineman Jack Conklin, as he comes over from Tennessee.

As a team, the defense collected 38 sacks and 14 interceptions.  The Buccaneers were guided on offense by linebacker Joe Schobert.  He totaled 133 tackles, but left for the Jaguars in the offseason. Defensive end Myles Garrett registered 10 sacks, while playing just 10 games.  Defensive back Denzel Ward paced the secondary with 2 interceptions and 11 passes defended. The Browns did sign former Minnesota Vikings safety Andrew Sendejo during the offseason.  This was a big addition for Cleveland, after the secondary personnel in Eric Murray and Damarious Randall will not return. Another area where the Browns bolstered their defense was on the defensive line.  The Browns struggled to stop the run, ranking 30th, but did bring in former Bengal Andrew Billings. Billings has done a nice job in his career clogging the running lanes. The Browns also signed former Raider safety Karl Joseph.

Looking at the Browns schedule for the 2020 season, Cleveland doesn’t have the toughest of schedules.  The Browns have home games outside of the division against: Houston, Indianapolis, Philadelphia, Las Vegas, Washington.  The Browns hit the road for games against: Jacksonville, New York Giants, New York Jets, and Tennessee.

The projected win total is set at 5.5 wins for the Browns during the 2020 season.  It’s no secret the Browns management was not satisfied with how the Browns under performed last year.  Cleveland made more than a few moves trying to bring in better players at certain positions. Cleveland has a lot of talent on the offensive side and if Mayfield can get them the ball and he can limit the interceptions, Cleveland could have a solid offense. The Browns should not regress in the win column from a year ago, therefore I’m going to take the over.  The Browns have more than 5 very winnable games.  I’m going to side with the over as Cleveland should get at least 7 wins.