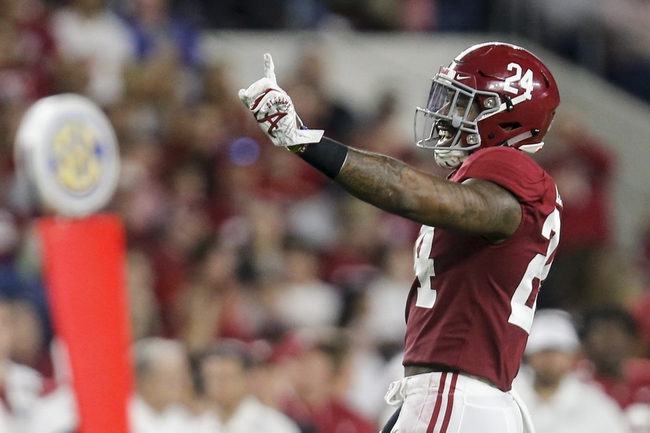 Former Alabama Crimson Tide standout Terrell Lewis is expected to be a second or third-round pick in the 2020 draft. Coming out of high school, Lewis was a four-star recruit, and the number one rated player in Washington D.C. in the class of 2016.

College Career: Early in his career in Alabama, Lewis dealt with injuries and that really hurt some of his progression, but he sure finished his career strong. He was a second-team All-SEC selection in 2019 after racking up 31 tackles, with 11.5 of those going for a loss. He also had six sacks and two pass breakups.

Pros: Lewis does a great job of getting a quick burst off the line of scrimmage, and that is going to transition well into the NFL. He also has really long arms, which he puts up and does a great job of knocking down the ball. He probably fits better in a 3-4 scheme, but he also could play in a 4-3 scheme. It’s also hard for an offensive lineman to get their hands on him, and he is going to be a problem with that at the next level. He is slippery, and if he improves on a couple of things he could be a matchup nightmare.

Cons: He doesn’t have great vision of the field and if he gets stopped early by the offensive line he will sometimes give up on the play. When offensive lineman do get their hands on him,he has issues getting away. HIs motor sometimes shuts off and he needs to be more consistent with that at the next level.

Projected Career: Where people expect Terrell Lewis to be drafted is all over the place, but if he went past the middle of the third round it would be a bit shocking. The New York Giants and Baltimore Ravens are both teams who need some defensive help.

Outside of the injuries, Lewis is a pretty safe pick, so it wouldn't be shocking to see a team trade up to try and get him.

The pick in this article is the opinion of the writer, not a PickDawgz site consensus.
Previous Pick
Seattle Seahawks 2020 Win Total- NFL Picks and Predictions
Next Pick
Jaylon Johnson 2020 NFL Draft Profile, Pros, Cons, and Projected Teams