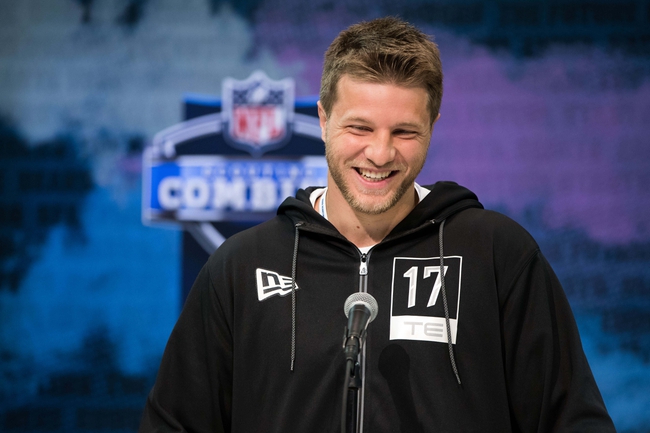 Adam Trautman is a Tight End from Dayton.  The tight end has made a name for himself over the last couple years.  The Dayton product has been one of the best pass catching tight ends between the FCS and FBS levels.  Let us take a look at his college career, pros, cons, and projected teams.

College Career: Trautman played at Dayton from 2016-2019 and collected 31 receiving touchdowns, while hauling in 178 receptions.  The tight end accumulated nearly 2,300 yards receiving during the 4 seasons. Trautman saw his best season happen during the year of 2019, where the senior reeled in 70 receptions for 916 yards and 14 touchdowns.  He was named to numerous All-American teams, with one of the honors being STATS FCS All-American.

Pros:  The tight end features a solid wingspan, as Trautman stands at 6’5.  Trautman ran a 4.8 during the 40 yard dash at the NFL Combine. He has the ability to produce a nice mixture at the next level with speed and being able to make good cuts for short yard pass plays.

Cons: Doesn’t have a whole lot of experience at the position.  When he committed to Dayton, he was a quarterback. He will have to adapt from the FCS level to the NFL.  He did not have the luxury of competing against power 5 conference teams, but nonetheless Trautman is a very athletic tight end that should still get drafted over other tight ends from the FBS.  Trautman will need some time to work on his blocking at the professional level.

The Packers need better and more options in the receiving game for Aaron Rodgers.  The Packers have Davante Adams, but after that the talent level drops off, especially since tight end Jimmy Graham went to the Chicago Bears.

The Patriots need to improve more than ever in the passing game, due to Tom Brady leaving.  The Patriots have to improve their passing game options, as New England struggled at times even with Brady under center last season. The Patriots will need to draft pass catchers in the upcoming draft.  As well as tight ends have fared and developed in New England, Trautman could be a solid fit.

The Steelers could use help at the tight end position, as their number 1 tight end Vance McDonald didn’t even record 300 yards receiving. Look For the Steelers to draft a tight end.

The pick in this article is the opinion of the writer, not a PickDawgz site consensus.
Previous Pick
Anfernee Jennings 2020 NFL Draft Profile, Pros, Cons, and Projected Teams
Next Pick
Seattle Seahawks 2020 Win Total- NFL Picks and Predictions