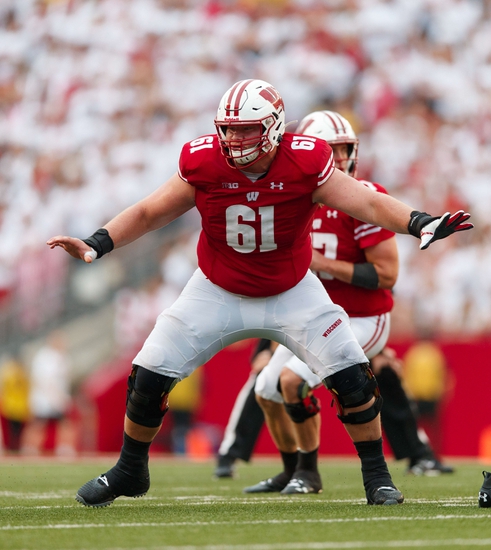 Center Tyler Biadasz is one of the top centers in the draft, and is projected to go in the middle rounds. Coming out of high school Biadasz was a standout on the defensive and offensive line. In the class of 2017, Biadasz was a three-star recruit and the number seven player in the state of Wisconsin.

College Career: The Badgers knew they wanted Biadasz to play on the offensive line, and that worked out well. As a redshirt freshman, Biadasz started all 14 games at center and was named a freshman all-American. In 2018 he started all the games again. Before the 2019 season, Biadasz had hip surgery but he was fully recovered for the start of the season and had no issue. He started all 14 games and won the Remington Trophy as the nation's top center.

Pros: Biadasz is an overall solid player, and has great power throughout his entire body. Biadasz has great hands placement, and not too often is he found out of position. He is also really smart and does a great job of getting the offensive line all their assignments. When he gets to the second level he does a great job of taking great angles to get to the linebacker to block.

Cons: The injuries are a big concern and something teams need to take a close eye at. He has dealt with hip and shoulder injuries each of the last two seasons. At times when Biadasz is blocking his base gets too thin and causes him to be knocked off balance. At times during the 2019, Biadasz had issues sustaining blocks.

Projected Teams: There are plenty of teams who need center depth and he should be on their radars. The New England Patriots are a team that makes a whole lot of sense, along with the Miami Dolphins who have a boatload of draft picks.

The Los Angeles Rams are another team that needs some offensive line help, and a few years down the road, he could be their starting center.