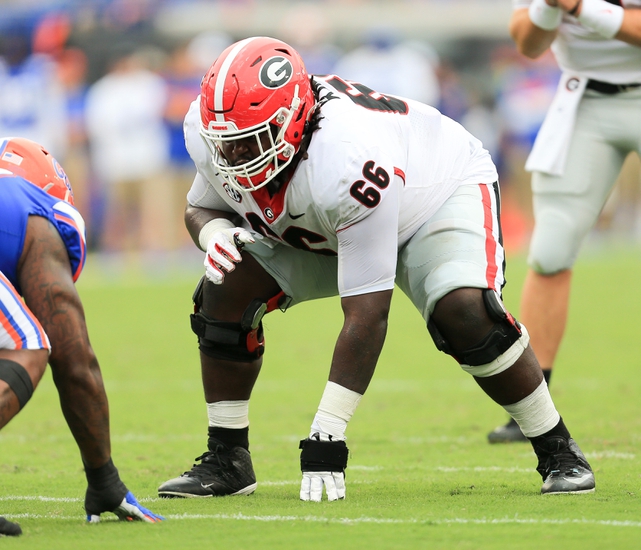 Offensive lineman Solomon Kindley is projected to be a mid-round draft pick in the 2020 draft. Coming out of high school Kindley was a three-star recruit in the class of 2016. He was the 146th ranked player in the state of Florida.

College Career: Kindley wasn’t someone anyone was talking about when he came to Athens but he still found a lot of Georgia Bulldogs. His first year on campus, Kindley only played one game and was a redshirt. As a redshirt freshman. Kindley started seven of the team’s 15 games at right guard and although there were some growing pains, he did play strong. As a sophomore he took some big steps forward and he started to be looked at as an NFL prospect. In 2019 he played 11 games at left guard before leaving school for the NFL draft.

Pros: Kindley plays with a mean streak and he isn’t going to be afraid going against anyone in the NFL. With his mean streak he can get defenders rattled and has been known to draw a personal foul penalty or two on the opponent. He also has very active feet that are always moving. That is something that will help him transition to the NFL. He also is very strong with his upper body and he does a good job of keeping defenders off balance with it.

Cons: The biggest issue with Kindley is with his helmet positioning. He often dips into the defenders and uses his helmet as a weapon. Not only is that bad technique, but he could also suffer a serious injury.  He also is slow off the line of scrimmage which leaves him at a disadvantage. He uses his feet, but sometimes he gets in the wrong position.

Projected Teams: Kindley plays with a mean streak and depending on how long he drops there will probably be plenty of teams that want him on their squad.

The New England Patriots need to focus on the offensive line and Kindley in the middle rounds would make a lot of sense.

The Miami Dolphins are another team that needs offensive line and with their boatload of draft picks, Kindley could make a lot of sense.