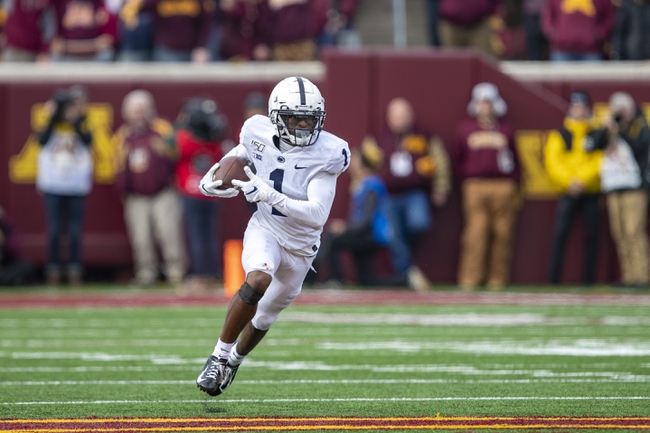 Wide receiver K.J. Hamler is projected to be a second or third-round pick in a draft that is loaded with wideouts. Coming out of high school, Hamler was a four star prospect in the class of 2017. He was the 47th ranked wide receiver in the class.

College Career: Hamler dealt with an ACL injury which caused him to miss his first season with Penn State. During the 2018 season, it didn’t take long for him to take off catching 42 passes for 754 yards and five touchdowns. In 2019 the wide receiver stats went up catching eight touchdowns. He was also a standout kick returner.

Pros: Hamler is a threat to take it the distance anytime he gets his hands on the ball. He is also a threat anywhere on offense, and whatever team drafts him could be very creative with how they use him. As a ball carrier, he is competitive, and at worst case he probably could start a game or two in the backfield. As fast as he is, he also does a good job of keeping under control.

Cons: He gets the most out of what he has, but his frame is small and there is always the concern for injuries. HIs hands also aren’t great, and sometimes he fights the catch. He also isn’t going to bail out a quarterback on a bad throw.

Projected Teams: This is a loaded wide receiver class and there are plenty of teams that need help in that position. The Minnesota Vikings need a wideout bad, and if they don’t spend a first-round pick on a wide receiver, Hamler makes a whole lot of sense.

Even with the New York Jets bringing back Robby Anderson they need mor help out wide, and their second round pick could be used on Hamler.

The Philadelphia Eagles are another team that makes a lot of sense.