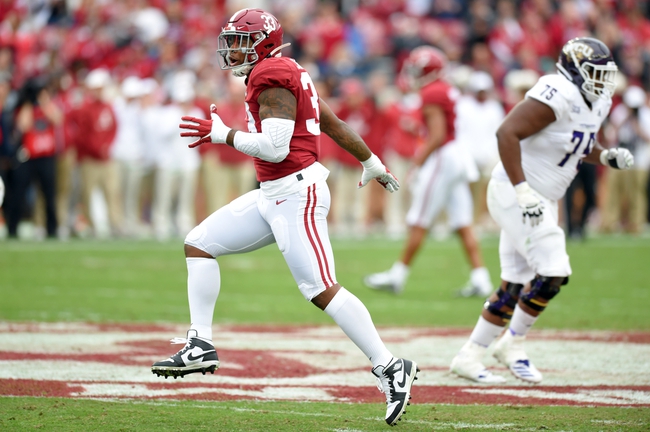 Linebacker and EDGE Anfernee Jennings is expected to be a middle-round pick in the 2020 NFL draft.

Jennings was a four-star recruit in the class of 2015, He was the seventh-ranked player in Alabama and 177th ranked player overall.

College Career: Jennings was highly touted coming into Alabama, and as a redshirt freshman he played in 15 games as a backup. The next season he started to live up to the expectations moving into the starting lineup and had 41 tackles, one sack, and two forced fumbles. During the 2018 season, he started 14 of 15 games and had 6.5 sacks. In 2019 he was named to All-SEC first team after putting up eight sacks.

Pros: At Alabama, Jennings lined up at EDGE at Alabama, but he also might be able to line up at linebacker. He does a great job with getting after the quarterback, and a big reason is because of his hand placement. Against the run, he always seems to be in the action, and he does a good job of blowing up the offensive line. On third down, he could move inside and get after the quarterback from there.

Cons: He is sometimes late off the line of scrimmage, and that is going to be a big issue at the NFL. It’s even more important at the NFL that Jennings finds a way to be quicker off the snap. In the open field, he sometimes struggles to tackle in the open field, and a quick little juke sometimes makes him lose his balance. Against slower quarterbacks, he will be able to close, but against quarterbacks who have some agility, he might have issues finishing the deal.

Projected Teams: There are a lot of teams who could use Jennings on their team. The Detroit Lions are a team that needs some front seven help on their defense, and bringing in Jennings would make them better.

The Carolina Panthers are another team that needs some front seven help, and working a guy under Matt Rhule would be really good for Jennings’ game.