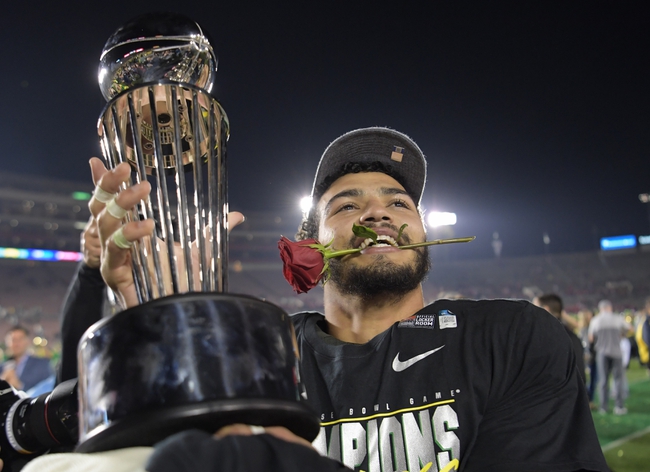 Much like a lot of other prospects where Troy Dye is going to go really seems up in the air. Some believe the linebacker could have a chance to be a first-round pick, while others see him falling to the third or fourth round. Coming out of high school, Dye was a three-star recruit.

College Career: It didn’t take long for Dye to become a standout with the Oregon Ducks. As a freshman, he started nine of the 11 games and for his efforts, he was named a freshman All-American. He continued to improve during his time at Oregon and 2019 was the best season on campus. Dye led the Ducks in tackles for the fourth straight season and he also had two interceptions, two forced fumbles, and four pass breakups.

Pros: Dye is a very instinctive player and it doesn’t take him long to diagnose if ‘it’s going to be a run or pass play. He is also very athletic so after Dye reads the play he does a great job of getting to the right position quickly. He also has a great motor and as the game goes on he really doesn’t get worn out. He might be an every-down player in the NFL but he has everything to be a special teams standout.

Cons: Dye is a little undersized and it wouldn’t be the worst thing if he added some more muscle to help his game. When he matches up again stronger defensive lineman he sometimes can be pushed back. He would probably work best in a 4-3 system where he can use his speed more, and chase after the running back and quarterback.

Projected Teams: The Atlanta Falcons are a team that could use linebacker help and right away he should be able to help on special teams. The Falcons run a 4-3 system and Dye would be a great addition to the squad.

The Cleveland Browns also could use Dye’s speed on special teams and hope to develop him into an NFL linebacker.