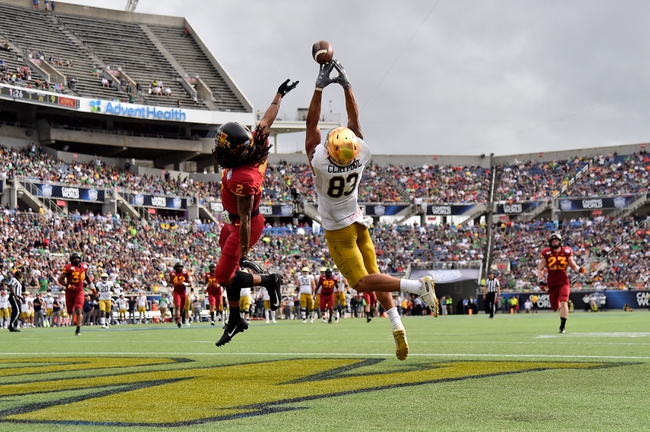 College Teams: Claypool wasn’t getting a whole lot of attention coming out of high school, but some highlight tapes posted on Facebook landed him on Notre Dame. As a true freshman, Claypool only had five catches, but he was just getting started in South Bend. During the 2017 season, he started eight games and put up 402 yards and two touchdowns. As a junior he continued to improve, but as a Senior is when he really took off. Claypool posted 66 passes for 1,037 yards and 13 touchdowns.

Pros: Just looking at Claypool he looks like a wide receiver that is going to be a difference-maker in the NFL. He has a lot of speed, and he also has good strength to not get bumped off his routes. He also does a good job of battling after the catch for yards. He also is really good on special teams and at least early that would be a great spot for him to play, even if he is playing receiver too.

Cons: At times Claypool has issues beating defenders in press coverage and that is a concern coming to the NFL. He also is a body catcher, which is fine during college, but in the NFL he could run into trouble. Drops haven’t been an issue yet, but it’s something to keep an eye on in the NFL.

Projected Teams: If the New England Patriots want to select another wide receiver in the first round, a guy like Claypool would make a lot of sense.

If he lasts to the second round, a team like the Minnesota Vikings trading up to take him would be a perfect match. With Stefon Diggs gone, the Vikings need to target a wide receiver in this draft.