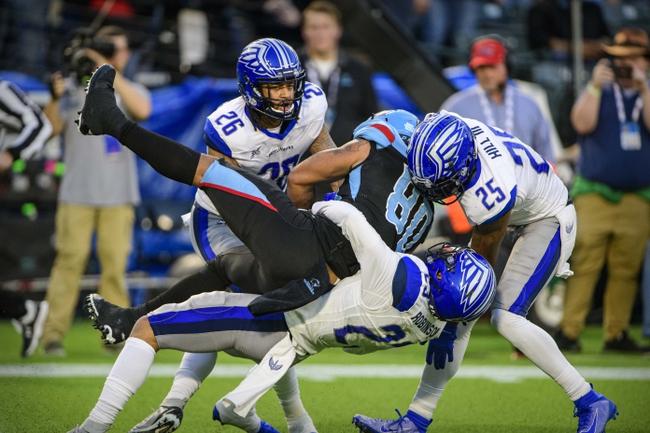 Kenny Robinson Jr. is a safety that played college ball at West Virginia, but most recently played for the St. Louis Battlehawks.  Robinson turned to the XFL for personal reasons after playing 2 seasons at West Virginia. Let us take a look at his college career, XFL stint, pros, cons, and projected teams.

College Career: Robinson finished his college career with 123 tackles, 7 interceptions, 2 touchdowns, and 7 pass break ups.  As a sophomore, he collected All-Big 12 First Team honors as a defensive back. As a freshman, he was All-Big 12 Conference Honorable Mention.

St. Louis Battlehawks: Robinson made his presence known throughout the XFL, especially in St. Louis.  The safety collected 21 tackles, 2 interceptions, 1 sack, and had 2 pass break ups during the 5 week shortened XFL season.  The safety was a big reason why the Battlehawks had a great defense through the 5 weeks.

Pros: He displayed great ability to roam the middle of the field and then close with good speed.  He displayed good quickness and being step for step with receivers. Robinson showed great instincts by reading the quarterback and the play before it developed.  Not only is Robinson athletic, he is a very lengthy player for the secondary. He has the ability to adapt to professional football faster over other potential draftees for that position.  The experience in the XFL will only help Robinson’s case.

Cons: A downfall is that Robinson didn’t get to play a full season like other college players hoping to get drafted.  The safety only had 5 games, compared to college players playing 11-13 games. He did show some weakness in tackling at times, where he would fail to wrap up the ball carrier.

Projected Teams: Jacksonville Jaguars and Tampa Bay Buccaneers. Both these teams are in need of help in the secondary.

The Tampa bay Buccaneers had one of the worst pass defenses in the NFL a year ago.  The coaching staff for Tampa Bay will be wanting to improve the defense, in hopes of having a successful season with Tom Brady under center.  Robinson could fit in nicely with Tampa Bay.

Kenny Robinson is a unique story and could be a reason the XFL would hang around if someone happens to buy the team from Vince McMahon.  Scouts and players could look at the XFL as a developmental league. Robinson did make his case known by intercepting former NFL quarterbacks during his short stint with the St. Louis Battlehawks.   No other player has left years of eligibility at college to play in the XFL. It will be interesting to see how early teams draft Robinson in the draft, as no other player has this experience or story.

The pick in this article is the opinion of the writer, not a PickDawgz site consensus.
Previous Pick
Matt Peart 2020 NFL Draft Profile, Pros, Cons, and Projected Teams
Next Pick
Denver Broncos 2020 Win Total- NFL Picks and Predictions