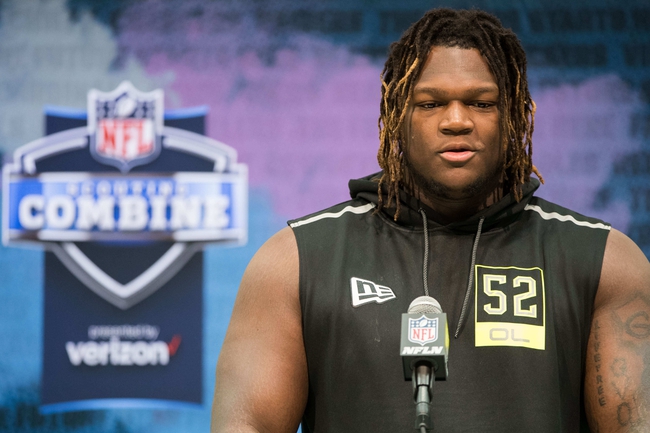 Isaiah Wilson is projected to be a first or second-round pick and could be an impact player right away on the offensive line. Coming out of high school Wilson was a five-star recruit and was the number one ranked player in New York in the class of 2017.

College Career: Wilson actually grew up in Queens, New York and not often does a big offensive tackle come out of there. Wilson signed with the Georgia Bulldogs but redshirted his first season. The redshirt year did him well, as he started all 14 games next season at right tackle and was named to the SEC All-freshman team. As a sophomore, he played well but was limited to only 11 games because of injury. Wilson sat out of the team’s bowl game to get ready for the draft.

Pros: Wilson is big and for his size he is quite explosive. He is 350 pounds and most of that is good weight that he uses to his advantage. In the run game, he is powerful and can move defensive players out of their way with little concern. Even though he is a run-first offensive lineman, he has gotten better with pass protection, and he is still young so it’s something he can still improve on.

Cons: The biggest concern for Wilson is with his hands, and it’s something he needs to improve on in a big way. He has long arms, but terrible hands placements at times can get him beat. He also needs to get better with his feet in pass protection. If those feet can get better, he is going to be in the league for a very long time.

Projected Teams: Much like most of the offensive lineman this year, where each guy is going to go is a big toss-up.

The Tennessee Titans are a team that makes a lot of sense if they want to take an offensive lineman at the end of the first round. Early in the second round the Bengals would make a lot of sense.

The Miami Dolphins also have a boatload of draft picks and need some offensive help.

The pick in this article is the opinion of the writer, not a PickDawgz site consensus.
Previous Pick
Denver Broncos 2020 Win Total- NFL Picks and Predictions
Next Pick
Jedrick Wills 2020 NFL Draft Profile, Pros, Cons, and Projected Teams