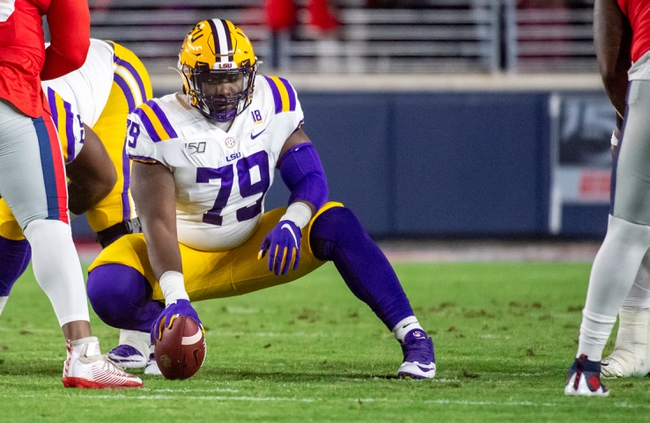 Lloyd Cushenberry is considered by many one of the top two center’s in this draft, but where he might be drafted really seems up in the air. Coming out of high school, Cushenberry was a three-star recruit in the class of 2016. Cushenberry was the 71st ranked recruit in Louisiana.

College Career: Cushenberry redshirted his first year with the LSU Tigers, but he quickly proved how good of a player he was and how selfless of a leader he was. As a redshirt freshman, he was mostly a special teams player, but as a Sophomore, he started all 13 games. As a Junior, he earned the number 18, which is given to the player for the Tigers that has the most selfless attitude. He was named to the first-team All-SEC, and he was a big reason the Tigers were able to win the National Championship.

Pros: The first pro with Cushenberry starts with his character. The first-ever offensive lineman to be given the number 18 jersey by the Tigers, which says a lot about him. He also has a huge reach, which helps him, especially at the center position. He keeps under control getting to the second level which is something teams have to be excited about. He also does a great job of communicating with the offensive line and the quarterback. It’s been made clear he is a good leader.

Cons: The biggest knock on Cushenberry’s game is with his weight distribution. At times he is a little top-heavy and that gives Cushenberry troubles. At times his feet also top during pass protection and that little lapse lets his opponent by him.

Projected Teams: The Seattle Seahawks make a whole lot of sense for Cushenberry. Starting center Justin Britt has a big salary and if the Seahawks could they might want to get him off the books.

The Bears are also a team that needs offensive line help and Cushenberry could be a great addition to them.

Other teams that could make sense would be the Kansas City Chiefs and Minnesota Vikings.