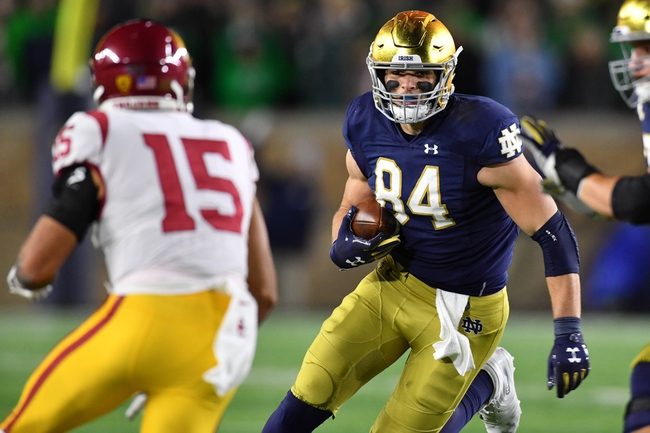 This isn’t a very strong draft class for tight ends but Cole Kmet is projected to be the first one taken off the board.Coming out of high school Kmet was highly recruited. Kmet was the third-ranked tight end in the class of 2017.

College Career: Kmet has had an interesting college career. With Notre  Dame, not only was he a standout for the football team as a tight end, he was also a pitcher on the baseball team.

Kmet doesn’t actually have all that impressive of stats in the passing game. As a freshman, he was basically a non-factor catching only two passes for 14 yards. As a sophomore, the production was a little better catching 15 passes for 162 passes.

In 2019, Kmet did have a big jump in production catching 43 passes for 515 yards and six touchdowns.

Pros: Kmet didn’t get a lot of chances before this last season, but even though he is raw, he has proven he is a very good receiver. Kmet does a really good job of releasing off the line of scrimmage, He is good out a three-point stance, and he will be able to line up like that a lot in the NFL.

Kmet does a great job of taking a hit in the middle of the field and holding onto the ball. Kmet also does have good hands.

Cons: There are tight ends that are worse blockers, but Kmet really needs to improve his blocking to take his game to the next level. Kmet struggles when he is one on one against defenders, and that could be an issue in the NFL. If Kmet can improve his hand placement while blocking, that could change his blocking game around.

Projected Teams: The Bears added Jimmy Graham but that doesn’t mean they should be done bringing in a tight end. Graham is a short term option, while Kmet could get adjusted to the NFL, and be a long term guy for the Bears.

The Green Bay Packers are also another team that needs a tight end with Graham gone, and Kmet would be a perfect addition to their squad.