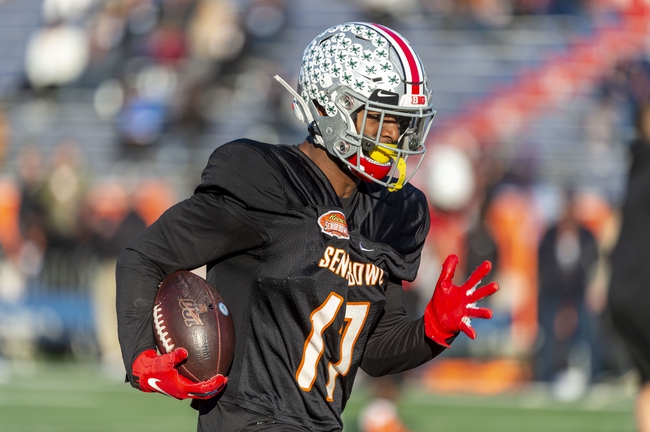 This is a loaded draft class and guys like K.J. Hill are sometimes overlooked. Coming out of high school, Hill was a four-star recruit and the number one ranked player coming out of Arkansas in 2015.

College Career: Hill sat out his first season as a freshman, and as a redshirt freshman he didn’t have a whole lot of impact catching 18 passes for 250 yards and a touchdown. Hill’s best season with the Buckeyes was in 2018, catching 70 passes for 885 yards and six touchdowns. He did enough to earn a spot All-Big Ten Honorable Mention team.

In 2019, he had only 636 receiving yards but he caught 10 touchdowns. Although the stats don’t pop off the pages, he was a key part of the Buckeyes offense and was often overlooked because of how many playmakers are on the team.

In man coverage, he also does a good job of using his weight to create separation against defenders.

He has good hands and can make quarterbacks look good, even if the throw is off. On deep balls, HIll is a threat who does a good job of adjusting to the ball in midair.

Cons: HIll is a short player which isn’t always a terrible thing, but it will make life tougher on him in the NFL.

With his small body size, he also sometimes gets knocked off routes, which could be a big concern as he adjusts to the NFL.

If Hill matches up against a taller defender he has a hard time with jump balls, and the ball gets knocked down a lot.

Projected Teams: The Minnesota Vikings need a wide receiver with Stefon Diggs gone and if they decide to go a different direction with their first-round picks, Hill would make a whole lot of sense.

Dwayne Haskins also played with Hill at Ohio State and has made it clear he would like to play with him again. The Washington Redskins need another wide receiver, and giving Haskins another target makes a whole lot of sense.