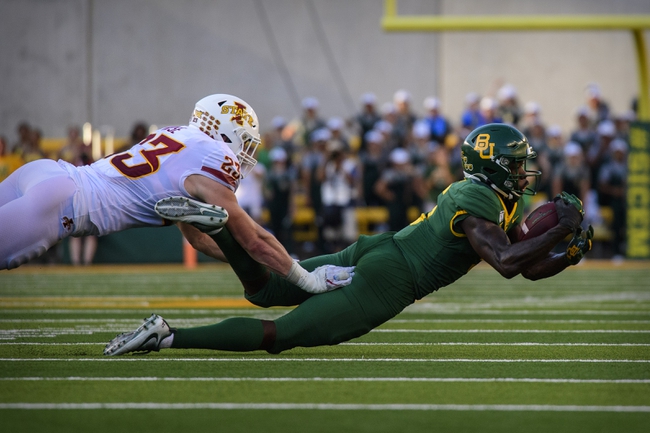 This is a loaded wide receiver class and Denzel Mims is one who many believe could be the better wideout in this draft class. Coming out of high school, Mims was a three-star recruit and in 2016 he was the 68th ranked wide receiver in the class.

College Career: In 2016 as a freshman with the Baylor Bears, Mims didn’t have much of an impact catching only four passes in 11 games played. In 2017 as a sophomore is when Mims really took off, starting 11 of his 12 games catching 61 passes for 1,087 yards and eight touchdowns.

As a junior, the stats dropped off a bit, but as a Senior he was a standout once again catching 66 passes for 1,020 yards and 12 touchdowns.

Pros: Mims has proven he can be the leader of a team and should be able to come in and have an impact in his first season. One of the reasons Mims is such a strong prospect is because of his ball skills.

When a ball is thrown his way, and he needs to get into a battle with a defender, there is a good chance he is going to come away with a catch. He also does a great job of controlling his body near the sideline to make contested catches.

Cons: The biggest issue for Mims is still with his route running. He is a fine route runner, but in the NFL he needs to get better and more crisp with his cuts. Even if he doesn’t improve on that, he can be a good wide receiver, but that could take him to the next level.

Projected Teams: The Cincinnati Bengals can’t trust AJ Green and even if he does come back healthy, they still need more options out wide. If Mims is still available when they draft at 33, they need to jump all over him.

The Indianapolis Colts are also another team that needs a wideout, and they hold two draft picks early in the second round.