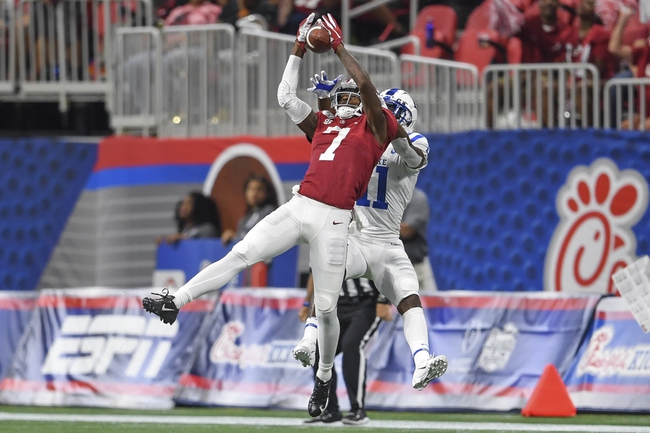 Cornerback Trevon Diggs is the younger brother of Buffalo Bills wide receiver Stefon Diggs. Coming out of high school in Maryland. Diggs was highly touted as he was ranked with four stars and he chose to play his college ball with the Alabama Crimson Tide.

College Career: Diggs didn’t take long to start playing for the Crimson Tide. As a true freshman, Diggs played cornerback and also played some wide receiver. Diggs actually had a bigger impact on offense catching 11 passes for 88 yards and a touchdown. He also was an explosive return man.

In 2018, Diggs became a full-time starter but he was hurt after six games and missed hte rest of the season. In 2019 Diggs was a lockdown corner and also intercepted three passes and one of those was returned for a touchdown.

Pros: Diggs best playing in zone coverage and if he is in the right system, there are some who believe he could be one of the best cornerbacks in football. He is also really good in press coverage and makes it hard for opposing wide receivers to get off the line of scrimmage. His size and length are a real help in coverage, and he also has a lot of range.

Cons: The biggest problem for Diggs is his tackling. Diggs isn’t a very good tackler and it’s something that could become a problem in the NFL. In college Diggs could get away with it, but at the next level, it’s something that needs to be improved upon. There were times, that Diggs also was burned by a double move.

Projected Teams: Two teams that make a whole lot of sense, both have connections to his older brother. The Buffalo Bills need some secondary help and putting him on the same team as his brother is probably something both guys dream of.

The Minnesota Vikings also still have a lot of work to do with the secondary, and Diggs would be a perfect addition. With the way it all ended with Stefon Diggs, that could cause the team to pause though with drafting his brother.