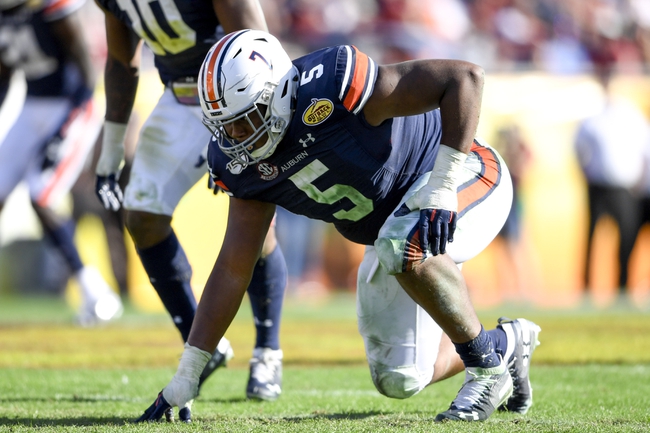 Derrick Brown is a standout defensive tackle that has the ability to be a game-changer in the NFL. In 2016, Brown was the number nine recruit coming out of high school, and he lived up to all of the expectations at Auburn.

College Career: In Brown’s first year with the Auburn Tigers he wasn’t really in the rotation recording only 11 tackles all season.

In 2017 was when Brown really started to show out starting all 12 games and he recorded 49 tackles and 3.5 sacks. Brown has done a whole lot of things that don’t show up on the stat sheet, and consistently drawing double teams.

In 2018 and 2019 he was consistently in the backfield and each of the two years he had at least 10 tackles for a loss.

Pros: The first big pro with Brown is his size. Brown has a wide-bodied frame that is distributed well for his position. He is also light on his feet, which causes him to be explosive off the line of scrimmage. Brown is also strong especially with his upper body which helps him get through the offensive line quickly. Brown is also a great role player that will do anything for the team to have success. He is a team-first guy that doesn’t need all the praise.

Cons: One of the first cons with Brown is at times he plays with a high pad level, which will really hurt him at the next level. It’s something that can be worked on, and needs to be if he wants to reach his full potential. At times Brown also gets to far in the backfield and doesn’t keep his gap integrity.

Projected Teams: Derrick Brown is worth a top-five pick, but with the way the draft board is shaping up, he could fall a bit. The Carolina Panthers hold the number seven overall pick and they need some help on the defensive side. His ability to clog up the middle would be a perfect fit for the Panthers and a great building piece on the front four.