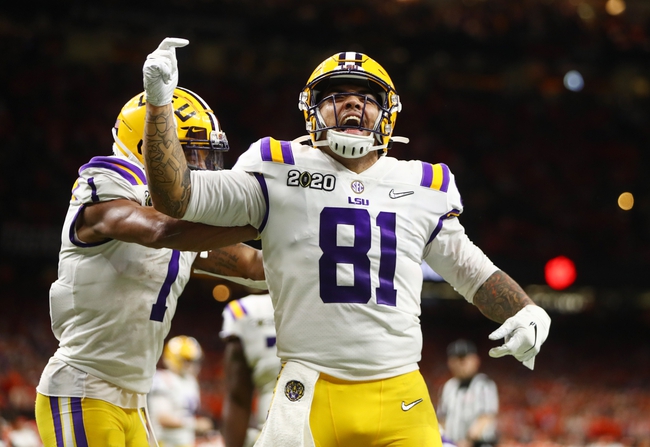 Thaddeus Moss is the son of Hall of Famer Randy Moss and could be a game-changing tight end in the NFL. Moss is 6'3", 225 pounds and was only a redshirt Sophomore when he left the LSU Tigers to enter his name into the draft.

College Career: Moss started his college career at North Carolina State and played in only five games before transferring to LSU. In those five games, he caught six passes for 49 yards and a touchdown.

With LSU he only played 12 games catching 47 passes for 570 yards and four touchdowns. Even though the stats don’t jump off the page, when they needed him most during the National Championship game, he stepped up to the plate.

Pros: Moss a lot like his father has great hands and he is going to be elite catching the ball at the next level. He also has a great catch radius, and if the ball is even close to him, he is going to come down with it. Moss is also a strong blocker that should be able to also be a great asset in the run game. He does a good job accelerating his feet in the blocking game.

Cons: Even though he has quick feet in the running game, running routes he has slow feet and that causes issues getting separation. When he breaks in a route, he really has to slow down, and will need to be something he works on when he gets to the NFL.

At times Moss also has issues getting off the line of scrimmage. He also isn’t much of a threat after catching the ball to make a big play.

Projected Teams: This is a weak tight end class which might help Moss go a little higher than he would other years. Moss has a skillset that would work on almost any team which makes projecting where he might go a little tough.

The New England Patriots desperately need tight end help, and with Moss being versatile, he would be a great option for this team.

The Vikings don’t really need a tight end unless they plan to move on from Kyle Rudolph but being drafted by the same team as his father would be a very good option.

The pick in this article is the opinion of the writer, not a PickDawgz site consensus.
Previous Pick
Jake Fromm 2020 NFL Draft Profile, Pros, Cons, and Projected Teams
Next Pick
FCS Draft Prospects for the 2020 NFL Draft