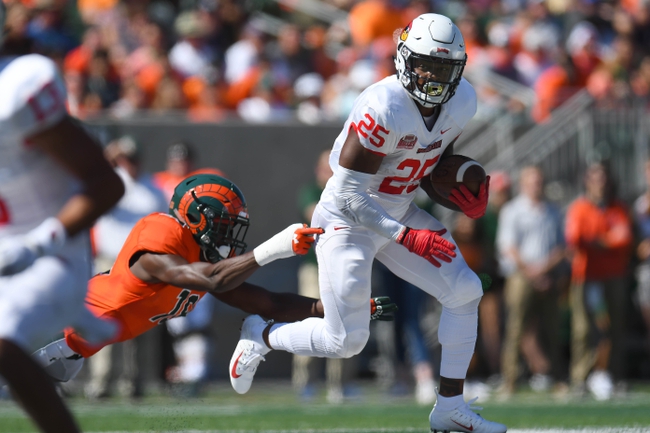 There are a lot of players from the FCS that get overlooked come the NFL draft, year in and year out. However, there have been more than a few players that have come from the FCS level and have had or are having a great professional career.

That is just a taste of some of the players from the FCS level that have made a name for themselves at the NFL level.  As I am sure, I left off someone’s favorite player, but that is the point, the list could go on and on. There is plenty of talent that has risen from the FCS.  Let us take a look at ten players that you should keep an eye on during the 2020 NFL Draft.

*These 10 players are in no particular order*

James Robinson/Illinois State (RB) - The workhorse out of Illinois State had a tremendous season out of the backfield.  Robinson rushed for 1,899 yards on 364 attempts, while totaling 18 touchdowns. Over the last two seasons, the running back has rushed for 3,189 yards, while scoring 30 touchdowns on the ground. Robinson was instrumental in helping the Redbirds make a playoff run this past season.  The native of Rockford, IL rushed for 297 yards on 41 carries and a score against SEMO in the first round of the FCS playoffs during the 2019 campaign.

Kristian Wilkerson/Southeast Missouri State (WR) - The 6’1 wideout from SEMO did his job during a 4 year career at SEMO.  Wilkerson had a great 2019 season, hauling in 71 receptions for 1,350 yards and 10 touchdowns. The wideout had 132 receptions over the last 2 seasons, totaling 2,244 yards and 24 touchdowns.  His best game came during the 2018 season against UT Martin, when he snagged 10 receptions for 263 yards and 3 touchdowns. Wilkerson was a big part of SEMO making the playoffs the last two seasons.  Wilkerson has put himself on the record books at SEMO.

Derrek Tuszka/North Dakota State (DE) - The 6’5 pass rusher was a 3 year starter for the Bison.  Tuszka finished the 2019 season with 13.5 sacks, while totaling 19 tackles for a loss. The defensive end registered 29.5 sacks for a career.  During his 5 seasons, North Dakota State went 70-5 overall. He was a finalist for the Buck Buchanan Award for his contributions during the 2019 campaign.

Jeremy Chinn/Southern Illinois (SS) - The safety out of Southern Illinois is one of the better defensive backs in the draft.  He finished the 2019 season with 4 interceptions. The native of Fishers, IN ended his Saluki career with 13 interceptions, 31 passes defended, 243 tackles, while forcing 6 fumbles.  He had a career high of 15 tackles in one game. Chinn was a participant in the Senior Bowl.

Kevin Davidson/Princeton (QB) - The 6’4 quarterback out of Danville, CA completed over 66 percent of his passes. Davidson threw for 2,569 yards and 20 touchdowns, while throwing just 6 interceptions.  The Princeton quarterback didn’t see much playing time his first two seasons, but totaled 25 touchdowns and 2,960 yards over the last 2 years. HIs best game came against Brown, where he threw for 381 yards on 29 completions, while recording 7 touchdowns and no picks.

Isaiah Coulter/Rhode Island (WR) - The junior wideout had a great 2019 season with the Rams.  Coulter collected 1,039 yards on 72 receptions, while collecting 8 touchdowns. The receiver reeled in 114 receptions, 1,643 yards and 11 touchdowns over the last 2 years for Rhode Island.  His best game came in a loss to William & Mary, when he hauled in 8 receptions for 153 yards and 3 touchdowns.

Bryce Sterk/Montana State (DE) - The senior defensive end registered 15 sacks for the Bobcats during the 2019 season.  Sterk started his career at Washington, but transferred to Montana State after the 2017 season. The defensive end totaled 65 tackles during his senior year.  During his two year career for the Bobcats, Sterk recorded 37 tackles for a loss, while collecting 23.5 sacks.

Josh Avery/Southeast Missouri State (DT) - The nose tackle is an under the radar prospect for fans, but scouts had their eye on him during this past season.  Avery was invited to the NFLPA Collegiate Bowl, which is the premier postseason all-star game for players eligible for the draft. The nose tackle while not being flashy in the sacks department, did his job by clogging up the running lanes.  He only had 41 career tackles and 2.5 sacks for the Redhawks in his career, but he seems to fit the mold as one of the most underrated players that will be in this draft. Avery is the first player in SEMO program history to be invited to the NFLPA Collegiate Bowl.