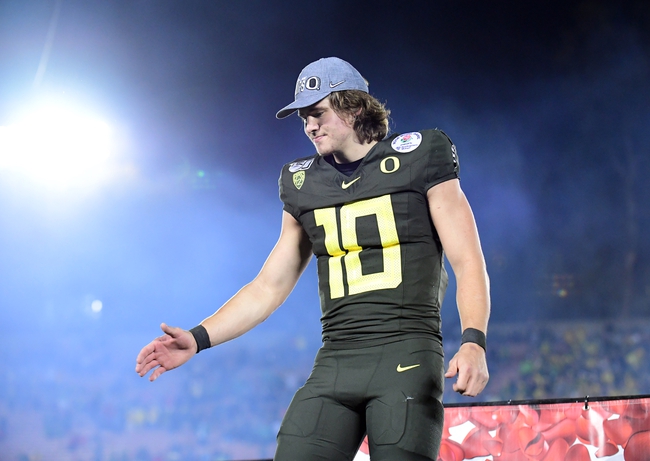 Former Oregon Ducks quarterback Justin Herbert has always been highly touted and heading into the 2019 college football season many believed he could be the number one overall pick. That doesn’t look like it’s going to be the case, but many project him to be a starting quarterback in the NFL for many years.

College Career: Herbert was a standout with the Oregon Ducks appearing in 43 games. As a senior, he started 14 games completing 66.8 percent of his passes for 3,741 yards, 32 touchdowns, and six interceptions.

The Ducks only lost two games during the 2019 season and they ended the season with a win over the Wisconsin Badgers in the Rose Bowl.

Pros: Herbert looks like an NFL quarterback and watching his tape shows just how good he can be in the NFL. Herbert has elite arm talent and isn’t afraid to take chances deep to give his wide receivers a chance to make a big play. Herbert, for the most part, is an accurate quarterback, that does a great job of fitting the ball into a tight window.

Cons: Herbert loves to take chances downfield and sometimes he floats the ball at times and it turns into an issue. Herbert also at times stays on his first read way too long, and by the time he forces it to a second or third option, it’s too late and it causes bad throws or turnovers.

Herbert also struggles at times with pressure in his face, so a good offensive line in front of him in the NFL is going to be a key.

At times he also has issues reading blitzes or defenses pre-snap.

Projected Teams: It seems the Bengals will be taking a different quarterback, but any other team early in the first round that needs a quarterback, makes a lot of sense.

The Miami Dolphins are a team that needs a quarterback, and Herbert could come in and start right away.

The Los Angeles Chargers are another team that needs a quarterback and could be looking towards Herbert.

Another team like the New England Patriots would make a lot of sense if they were willing to give up the trade capital to get him.