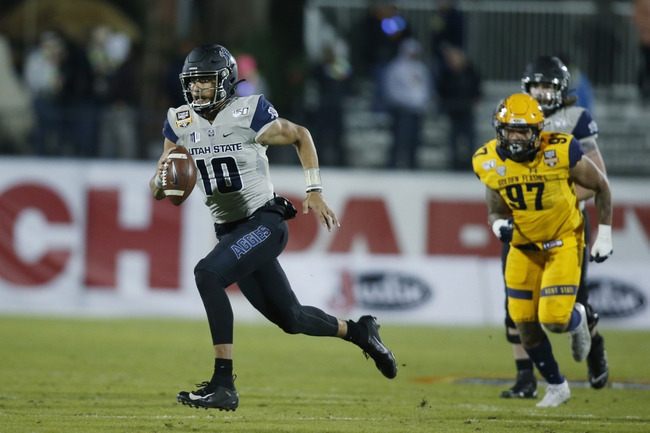 Jordan Love is one of the more intriguing quarterback prospects in this draft, but he also might be the one with the most questions surrounding him. Love is expected to be drafted somewhere in the first round, the big question just seems to be where.

College Career: Love was the full-time starter for two seasons with the Utah State Aggies, and after a spectacular sophomore season, interceptions were a problem in his junior season.

In 2018 Love threw for 32 touchdowns and six interceptions, but in 2019 he took a little step back throwing only 20 touchdowns and 17 interceptions. There was a coaching change after the 2018 season and some believe that could have been the issue, but if nothing else it’s something for teams to think about that are looking to maybe draft him.

Pros: Love has good size for a quarterback and that will help at the next level. Love is also is a player that is good at extending plays with his feet and has accuracy when he is passing outside of the pocket.

Even though he is mobile, he would rather stay in the pocket and does a good job of keeping his eyes down on the field.

Cons: Love’s biggest issues come with reading defenses and something that he will need to get better at in the NFL. At times when defenses rotate Love has problems adjusting to it and that has led to interceptions.

Love at times can also take too many chances, which was a big reason he had so many interceptions during the 2019 season.

The accuracy for Love isn’t terrible, but it’s also something that could be improved upon as he adjusts to the next level.

Projected Teams: There are two teams who make the most sense for Jordan Love and they are picking at different points in the first round.

There have been some connections to the Los Angeles Chargers for Jordan Love, and he would be a great franchise quarterback to build upon if they don’t feel the accuracy issues are too big of a problem.