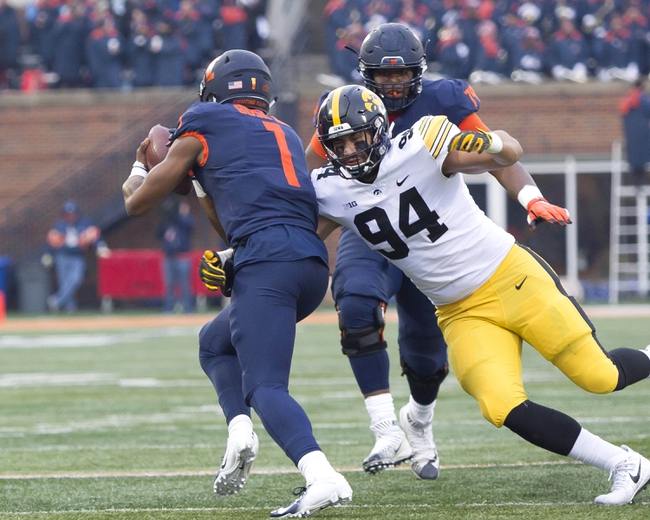 AJ Epenesa, a defensive end from Iowa, looks to be in the discussion as a 1st round pick, after a stellar season at Iowa.   Let us take a look at his college career, strengths, weaknesses, and possible fits.

College Career: The junior totaled 49 tackles and 11.5 sacks this season.  Epenesa collected 22 sacks over the last 2 seasons, while recording 26.5 for his 3 year career at Iowa.  During his college career, the defensive end forced 8 fumbles. Epenesa totaled 101 tackles over his 3 year career.

Strengths:  Epenesa torched the Big Ten over the last two years, by blowing past opposing team's offensive lines.  He proved he to be an asset rushing inside or outside around the blockers. The defensive end showed a great first step and did a nice job especially this season, keeping the opposing quarterbacks in the pocket. He will not need to be motivated, as he brings energy every time he steps on the field.  The defensive end has a nice size of 6’5 and 275 lbs.

Weaknesses: The talented defensive end, isn’t exactly the quickest, when put in the open field.  With that being a weakness, his other strengths outweigh this weakness. Epenesa struggled at the combine.  The defensive end posted a 5.04 in the 40 yard dash.

Possible Fits:  Epenesa is not the best defensive end in the draft, but that doesn’t mean he won’t go first round.  There are a couple teams towards the middle to the end of the first round that could use a defensive end.  The Tennessee Titans could use a pass rusher. The Titans as a whole struggled with pressure. One of the better pass rushers on the Titans from a year ago was Cameron Wake.  Wake has since been released and therefore does open up a spot for a defensive end in the draft. The Titans secured 43 sacks for the season, but the majority of those sacks came from the linebackers and the secondary.  Epenesa would give the Titans a legit pass rusher on the edge.

Another option is the Buffalo Bills.  The Bills have a stout defense, but Buffalo doesn’t exactly have a lot of youth on the defensive line.  A guy like Epenesa could still be available, due to a couple other defensive players being taken before the junior out of Glen Carbon, IL. Drafting a guy like Epenesa would allow him to get some professional experience, before being expected to be an every down player for the Bills.  Both organizations would be a good fit. AJ Epenesa has the ability to come in and make a difference on the edge, while also still having plenty of room to develop and improve.

The pick in this article is the opinion of the writer, not a PickDawgz site consensus.
Previous Pick
Tee Higgins 2020 NFL Draft Profile, Strengths, Weaknesses, and Possible Fits
Next Pick
Tampa Bay Buccaneers 2020 Win Total- NFL Picks and Predictions