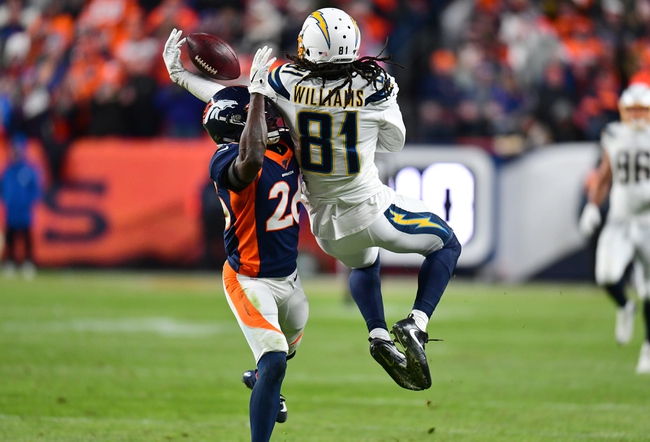 The Los Angeles Chargers will be trying to get back to relevance after a disappointing 2019 season.  The Chargers finished the season with a (5-11) record and will have a different leader on offense for the 2020 campaign.  Let us take a look and see who the Chargers will be looking at to contribute this season. Get NFL Predictions and Picks for Every NFL game at Pick Dawgz.

The Chargers will be playing their first season since 2004 without Philip Rivers on the roster.  As of right now, Tyrod Taylor is the quarterback for the Chargers, It is possible the Chargers could sign Cam Newton or draft a quarterback.  The Chargers will also be without Melvin Gordon, as Gordon is now on the Denver Broncos. So who do the Chargers have returning? Los Angeles will be looking to running back Austin Ekeler to mirror last season.  Ekeler rushed for 557 yards and 3 touchdowns, while collecting 993 yards receiving. The running back added 9 touchdowns as a receiver. The Chargers have a nice duo at the wideout position. Keenan Allen and Mike Williams  both totaled over 1,000 yards receiving. Allen finished with 1,199 yards on 104 receptions, while Williams had 49 receptions for 1,001 yards and 2 touchdowns. Williams averaged an incredible 20.4 yards per reception. Hunter Henry added 5 touchdowns receiving from the tight end position.

As a team, the Chargers registered 30 sacks and collected 11 interceptions.  The Chargers allowed 21.6 points per contest, which ranked 14th in the league.  Los Angeles will be without their leading tackler from last season, as Thomas Davis Sr. has moved on to Washington.  Davis collected 112 tackles last year. Joey Bosa impressed as a rookie, totaling 11.5 sacks and 67 tackles. Bosa had 20 tackles for a loss of yards.  Rayshawn Jenkins is back in the secondary, after collecting 54 tackles and leading the team in interceptions with 3. Melvin Ingram III added 7 sacks and 39 solo tackles.

The Los Angeles Chargers have seen their two well known play makers move on from the organization.  With that, the Chargers still have fire power on the offense. The defense was solid last season, but the offense will have to be more consistent.  The Chargers have a great pass rush, thanks to Joey Bosa and Melvin Ingram III.

Yes, the quarterback situation is a question mark, which the play out of the quarterback spot will depend on the full success of a season.  However, if Taylor is the guy, the talent on the offensive side is good enough to win games and should easily be able to improve from their record last season.  Why easily? The Chargers schedule is not exactly tough. Outside of the divisional games, the Chargers toughest games are Patriots at home and road games at New Orleans and Buffalo.  I’ll take the Chargers to at least go 8-8, hoping the Chargers stay healthy. I’m taking the over in this win total.