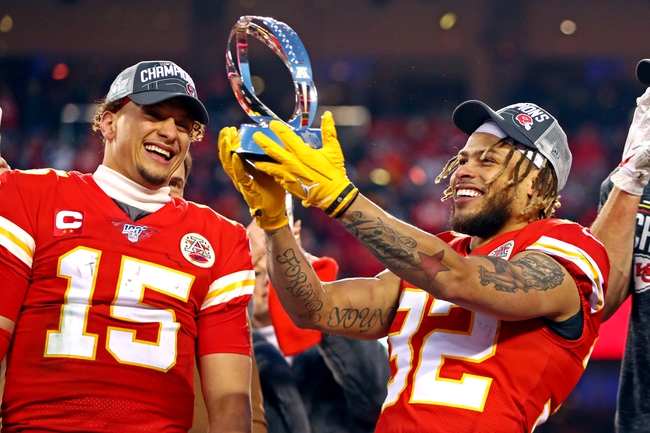 The Kansas City Chiefs will be trying to mirror the 2019 campaign, after winning the Super Bowl.  The Chiefs finished the regular season (12-4), and then won all 3 of their playoff games by double digits.  The Chiefs were the only team to finish above .500 in the AFC West. Let us take a look and see who the Chiefs will be counting on to contribute during the 2020 season. Get NFL Predictions and Picks for Every NFL game at Pick Dawgz.

The Chiefs will be led by none other than quarterback Patrick Mahomes.  Mahomes passed for 4,031 yards, while throwing 26 touchdowns and 5 interceptions.  The quarterback also added 218 yards rushing and 2 scores on the ground. Running back Damien Williams played in just 11 games during the 2019 campaign, collecting 498 yds rushing and 5 touchdowns, while also adding 30 receptions.  Tyreek Hill is back, after finishing the 2019 season with 860 yards receiving and 7 touchdowns. Tight end Travis Kelce has been Mahomes favorite target and this past season was no different, as the tight end collected 97 receptions for 1,229 yards and 5 touchdowns. The offense averaged 28.2 points per contest, which ranked 5th in the league.

Side note on the offense, the Chiefs did sign XFL quarterback Jordan Ta’amu to a one year deal.

As a defense, the Chiefs collected 45 sacks and had 16 interceptions.  The defense allowed 19.3 points a game, which was 7th in the league. Anthony Hitchens returns for the Chiefs at the weak side linebacker spot.  Hitchens led the Chiefs last season in tackles, finishing with a total of 88, while also adding 2 sacks. Damien Wilson collected 81 tackles and 1.5 sacks a year ago.  Alex Okafor is back on the defensive line, after posting 5 sacks in 2019. Tyrann Mathieu led the team in interceptions with 4, while having 12 passes defended. Chris Jones contributed 9 sacks and Frank Clark added 8 sacks.

The Chiefs did lose Emmanuel Ogbah who had 5.5 sacks during the 2019 campaign.

The Chiefs were the only team in the AFC West to finish the 2019 season with a winning record.  Looking at the 2020 season, the other teams in the AFC West will all have quarterback competitions.  Philip Rivers has left the Chargers, Marcus Mariota was brought in by the Raiders and will give Derek Carr a competition for the starting spot, while Denver is hoping Drew Lock will lock down the quarterback spot for his first full season.  Two of the games outside the division are against New England and Carolina. Both those teams will have lost their starting quarterback for the last so many years, in Tom Brady and Cam Newton. Half the teams on the Chiefs schedule will have some sort of a new face as the starting quarterback for a full season, with the only exception being the Raiders.

The Chiefs have a lot of firepower on the offense, with more than a couple players that force consistent pressure on opposing quarterbacks on the defensive side.  The Chiefs should be able to take advantage of their schedule this season. I’ll take the Chiefs to cover this win total this season, as Kansas City should run away with the AFC West.