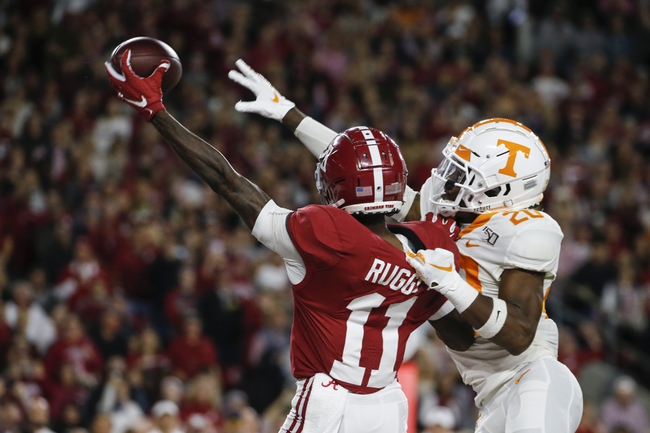 Henry Ruggs III did not have an overly flashy season during the 2019 season.  However, Ruggs fits the NFL style of play, after a successful career in the SEC for Alabama.  Let us take a look at his college career, strengths, weaknesses, and possible fits.

College Career:  Ruggs looks to have only needed 3 years at the college ranks, as he will forgo his senior year. The Alabama wideout finished his 3 year career with 98 receptions, 1,716 yards, and 24 receiving touchdowns.  He averaged nearly 18 yards per reception during his time at Alabama. Ruggs finished the 2019 campaign with 40 receptions, 746 yards, and 7 touchdowns.

Strengths: Ruggs is not a Calvin Johnson of size/length, but Ruggs can produce great speed once the ball is in his grasps.  The Alabama product showed time and time again during big games that once the ball is in his hands, he is very capable of making opposing players miss, once he is in the open field. Playing in the Nick Saban offense, the wideout was moving more times than not, which played to Ruggs advantage.

Weaknesses: The speedster is not the most physical at the line, so that is something that could be improved on.  Ruggs learning to be more physical could help him even more, as it will help breakaway from the secondary.

Possible Fits: The Denver Broncos, Philadelphia Eagles, Green Bay Packers, and Indianapolis Colts all need an upgrade at wide receiver.  Ruggs should be a mid to late first round pick and all these teams fit that time frame with their draft pick. The Broncos could use a wide receiver to help compliment the young Drew Lock at quarterback.  Sure, the Broncos have Courtland Sutton, but Ruggs would be a nice compliment to the offense. The Eagles like to pass the ball and Philadelphia currently has Alshon Jeffery and DeSean Jackson. Jeffery has had some injuries over the years, having just played 3 full seasons out of 8 years.  Jackson is coming off an injury as well, but has had a nice 11 year career.

The Colts have the possibility to have a powerful offense, with the Philip Rivers signing.  Ruggs could compliment T.Y. Hilton and Zach Pascal. The Packers could use wide receiver help, but I don’t see Ruggs being available when the Packers are on the clock.  I’ll take the Eagles as the best fit, as the Philadelphia receivers have had injuries in recent years, with Denver a close second.

The pick in this article is the opinion of the writer, not a PickDawgz site consensus.
Previous Pick
J.K. Dobbins 2020 NFL Draft Profile, Strengths, and Possible Fits
Next Pick
Los Angeles Chargers 2020 Win Total- NFL Picks and Predictions