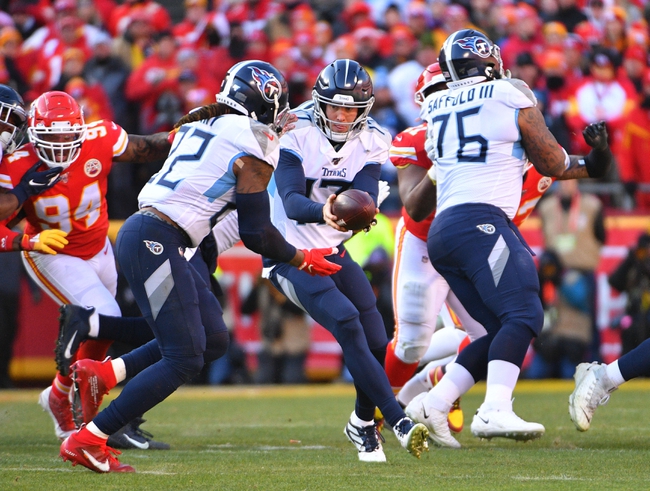 The Tennessee Titans will be looking to build off of their 2019 season, after finishing the year with a record of (9-7).  The Titans were able to make a playoff push, knocking off the Patriots and Ravens on the road, before giving way to the Chiefs. Let us take a look and see who the Titans will be looking at to contribute during the 2020 campaign. Get NFL Predictions and Picks for Every NFL game at Pick Dawgz.

Ryan Tannehill took advantage of the opportunity when taking over for Marcus Mariota.  Tannehill passed for 2,742 yards, while having an impressive touchdown to interception ratio.  The quarterback had 22 touchdowns to 6 interceptions. Tennessee has one of the better running backs in the league, in Derrick Henry.  Henry led the league last year in rush attempts, yards, and touchdowns. The Alabama product rushed for 1,540 yards on 303 attempts, while crossing the goal line 16 times on the ground.  Last year was Henry’s best year as a pro, during his 4 year career thus far.

A.J. Brown stepped up for Tennessee last year as a rookie, as the former Ole Miss standout registered 1,051 yards and 8 touchdowns.  The Titans are still waiting for their 5th overall pick from the 2017 draft to show consistency. Corey Davis collected 601 yards, while scoring just 2 touchdowns last season.  Davis has the talent to make the Tennessee passing offense dangerous, with Brown opposite of him.

As a team last season, the Titans totaled 43 sacks and 14 interceptions.  The Titans allowed an average of 20.7 points per contest, which ranked 12th in the league. Linebacker Rashaan Evans collected 69 solo tackles a season ago, while recording 2.5 sacks.  Adoree’ Jackson is back, after playing just 11 games last season. Kevin Byard led the team last year with 5 interceptions, while finishing with 9 passes defended. The Titans as of now have lost their leading tackler from a year ago, as cornerback Logan Ryan is a free agent.

The AFC South is going to be an interesting division to watch this season.  The Colts brought in Philip Rivers and the Texans have made some questionable trades.  The Titans should be competing for the 1st place spot in the AFC South. The titans return their core players, while the Colts and Texans will be trying to gel with new talent at the core positions on offense.  I like the contract extension given to Tannehill during the off season, he was more than deserving of it. The x-factor is Corey Davis. With the season Brown had last year, I look for Davis to get the ball thrown more his way, as teams should have single coverage against both Davis and Brown.