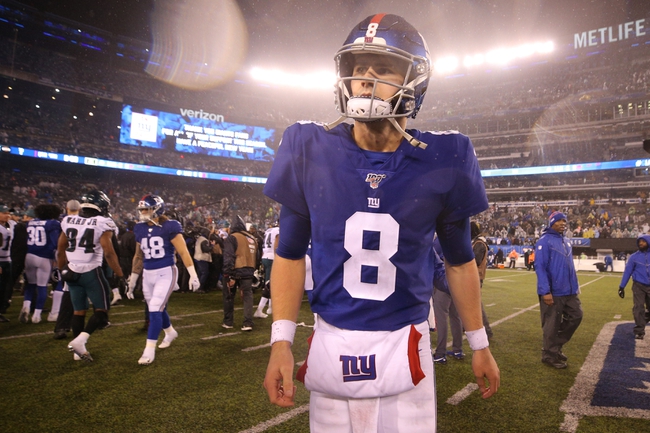 The New York Giants 2019 season was one to remember for the wrong reasons. This was the last season for the G-Men in the Eli Manning era, as the two-time Super Bowl Champion played his last few games in the NFL in 2019. The Giants are now left with Daniel Jones at Quarterback, Joe Judge as the new Head Coach and a lot of question marks heading into this upcoming season. Get NFL Predictions and Picks for Every NFL game at Pick Dawgz.

Offense: In 2020, the Giants will certainly need a full season from their star lottery pick, RB Saquon Barkley. Barkley battled injuries in 2019, which left his sophomore season feeling a little bitter. Daniel Jones will be in his second year and his first season as a full-time starter from the get-go. Colt McCoy was signed by NYG in the offseason to give Jones a good veteran aid as a backup. If Jones struggles, McCoy could definitely see playing time. The Giant's offensive line was a big problem in 2019, as many times Daniel Jones would have to deal with pressure. His continuous fumble problems are magnified when the O-Line struggles, therefore the Giants need to address this hole on their team before they can become a potent offense. As for wide receiver weapons, the Giants run a bit thin. Injuries plagued their WR's last season, with Sterling Shepard never really being an option for most of the season. It will be interesting to see if Darius Slayton can start from where he left off in 2019, as his rookie season ending was a very hopeful site to see for Giants fans.

Defense: The Giants' defense was among the leagues' worst a season ago. The team was able to bring in a bunch of new and intriguing players on the defensive side, such as Linebacker Blake Martinez and Cornerback James Bradberry. A complete reconstruction of the defense was needed for this team, as the Giants were not able to get the big stops they needed to win many games in 2019. Placing a Franchise Tag on Defensive Tackle Leonard Williams will ensure that he is a Giant for quite some time, which is a great move for the team. Williams is the much-needed star tackle that a team like the Giants will need to have a chance to compete. Overall, this defense still has a ton of work to do, but it could be quite improved in time for the 2020 season.

Overview: The New York Football Giants have had a string of poor-performances from almost all spots on the roster and coaching staff in recent years. This team will look a lot different than it did at the start of the previous season, so we will have to wait and see if that is a positive thing. I will lean with the under 6.5 wins because I cannot confidently say the Giants got better this offseason.