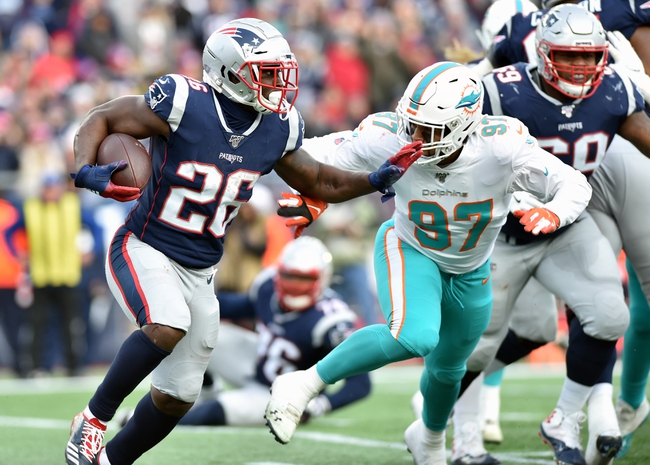 The New England Patriots will be heading into the 2020 season with a new identity from the 2019 campaign.  The Patriots finished the 2019 year with a record of (12-4), after falling to Tennessee in the playoffs. The Patriots will be opening training camp for the first time since the 1999 season without Tom Brady on the roster.  Brady has been a staple in New England since 2000 and will be looking to move forward without the star quarterback. Let us take a look and see who the Patriots will be looking at to contribute this season. Get NFL Predictions and Picks for Every NFL game at Pick Dawgz.

The Patriots have just 2 quarterbacks on their roster at this point.  The two quarterbacks are Jarrett Stidham and Brian Hoyer. Not knowing how the quarterback situation will look, due to the draft or other transactions, let’s look at some of the returning talent.  The always crowded New England backfield, will be just that again for the 2020 season. Sony Michel, James White, and Rex Burkhead should all see plenty of time. Michel paved the way on the ground, rushing for 912 yards on 247 attempts, while collecting 7 rushing scores.  James White added 72 receptions out of the backfield, totaling 6 touchdowns. Burkhead had over nearly 600 yards of total offense.

Julian Edelman who was a favorite target for Brady, recorded 100 receptions, totaling 1,117 yards and 6 touchdowns.  Mohamed Sanu Sr figures to have an increased role for the 2020 season. The Patriots need to upgrade their skill positions and add to them, as New England is not deep.

The Patriots stepped up at key moments last year, which seemed to be on a rather consistent basis.  As a team, the defense collected 47 sacks, while intercepting opposing quarterbacks an absurd 25 times.  Dont’a Hightower returns, after collecting 47 solo tackles and 5.5 sacks. Stephen Gilmore led the Patriots a year ago in interceptions with 6.

The defense will have to fill some voids, as Jamie Collins Sr and Kyle Van Noy have moved on to different teams.  Collins led the team in tackles and sacks. Van Noy forced 3 fumbles and added 6.5 sacks. The defense allowed just 14.1 points a year ago, which was the best in the league.

The Patriots have more than one area to fill this year and I’m interested to see how their team transforms in the coming weeks.  Bill Belichick is a great coach and I do think he can win without Tom Brady. However, the way the roster looks right now, I’m having a hard time seeing the Patriots replicate last season. The Patriots need better skill players, especially with Brady leaving.  The defense will have to be just as good as last year, if the Patriots want to succeed this season. The secondary is extremely talented and will go a long way in helping New England win some games.  I expect to see a regression from last year in wins.  Having said that, I would have a hard time betting against Bill Belichick not to get to double digit wins.  I like Buffalo in this division, but the Patriots should be able to get 10 wins. I’ll take the over, as New England should cover this win total, but finish with less wins than last season.