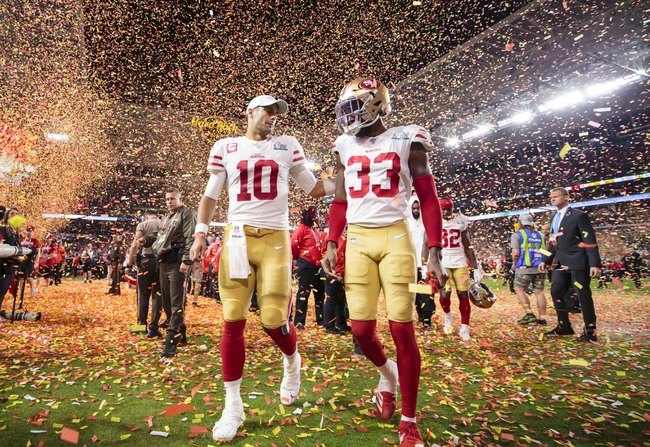 The San Francisco 49ers had a tremendous 2019 season, finishing the year (13-3), while making it to the Super Bowl.  The 49ers are led by Eastern Illinois product Jimmy Garoppolo. Garoppolo was on fire from the get go and found his favorite target to be tight end George Kittle.  Let us take a look and see who the 49ers will be counting on for the 2020 season. Get NFL Predictions and Picks for Every NFL game at Pick Dawgz.

Garoppolo completed 69.1 percent of his passes, throwing for 3,978 yards, and 27 touchdowns.  Kittle was Garoppolo’s favorite target and it was clearly noticeable. Kittle hauled in 85 receptions for 1,053 yards and 5 touchdowns.  Deebo Samuel broke out for a great rookie season, totaling 802 yards receiving on 57 receptions and 3 touchdowns. The backfield was a 3 headed monster, as Raheem Mostert, Matt Breida, and Tevin Coleman all had over 540 yards rushing.  The three combined for 15 touchdowns on the ground. The 49ers return all of their playmakers from last season that averaged 29.9 points per game.

As a team the 49ers had 48 sacks and 12 interceptions.  San Francisco allowed an average of just 19.4 points per game, which ranked 8th in the league.  Fred Warner, the 49ers leading tackler from last returns. Warner totaled 118 tackles, while registering 3 sacks and an interception.  Nick Bosa had a great rookie season, collecting 9 sacks after one year removed from Ohio State. San Francisco has a solid secondary, with the likes of Jimmy Ward and Richard Sherman.  Sherman led the team in interceptions with 3.

The 49ers return their offensive firepower from a season ago.  San Francisco has a nice balance of run and pass plays, under the direction of head coach Kyle Shanahan.  Garoppolo should only get better as these next seasons come and go and after seeing what he did last year, San Francisco should be in good hands.  The 49ers should be able to put up points just like last year. The defense has a good core of players in the secondary, while the leading tackler in Warner returns from a season ago.

The 49ers do have a tough schedule, especially on the road.  The 49ers will have road games at Dallas, New England, New Orleans, and at both New York’s, then the road games in the division.  The 49ers will also host Buffalo, Green Bay, and Philadelphia. The 49ers schedule looks to be more difficult than last season, but the 49ers should still find success on a consistent basis.  The chance of regression in wins is very possible with the schedule difference, but I still like for the 49ers to clear this total, but will finish with less wins than last season.