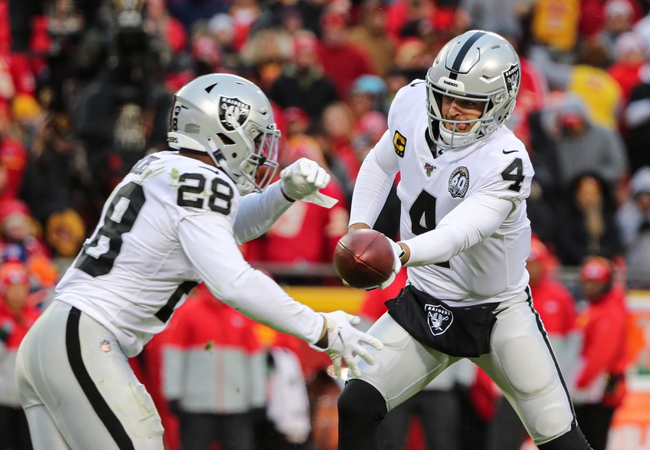 The Las Vegas Raiders will be trying to make a great impression in the first season in Las Vegas.  The Raiders looked like they were primed for a chance at a playoff spot last season. The Raiders were 6-4 at one point, but scuffled down the stretch.  Oakland lost 5 of their last 6 games to end the season. The Raiders finished (7-9) during the 2019 campaign. Let us take a look and see who the Raiders will have returning and will be looking at to guide this team in their first season in Las Vegas. Get NFL Predictions and Picks for Every NFL game at Pick Dawgz.

The Raiders brought in Marcus Mariota this year on a 2 year deal worth $17.6 million.  Most back ups aren’t paid money to that extreme. This means upper management is expecting Mariota to come in and compete for the starting job with Derek Carr.  Carr passed for 4,054 yards, while throwing 21 touchdowns and 8 interceptions. Carr finished the year with a 62.2 quarterback rating, which was 10th in the league.  Mariota played in just 7 games last season, passing for 1,203 yards and throwing 7 touchdowns. The former 2nd overall pick in the 2015 draft has thrown 31 touchdowns and 25 interceptions over the last 3 seasons.

Running back Josh Jacobs is back for his 2nd year in the league, after having a nice rookie season.  Jacobs rushed for 1,150 yards, while scoring 7 touchdowns on the ground. The Alabama product missed 3 games last season and still had no issue clearing the 1,000 yard mark.  Wideout Tyrell Williams collected 42 receptions, 651 yards, and 6 touchdowns. The Raiders also brought in Nelson Agholor, who had played his first 5 seasons with the Eagles. Coach Jon Gruden will be hoping tight end Darren Waller will be able to build off of last year.  Waller got off to a stellar start and finished the year with 90 receptions, 1,145 yards, and 3 touchdowns. Previously, Waller had a high of 85 yards receiving for a season in his 3 year career before last year.

The Raiders as a team last season totaled 32 sacks, while registering 9 interceptions.  Clelin Ferrell will be back on the defensive line, after recording 4.5 sacks and 10.5 tackles for a loss in his rookie campaign.  Erik Harris led the team in interceptions last season with 3, while playing strong safety. Maxx Crosby also returns, the rookie had 10 sacks a year ago. The Raiders did make a couple moves this off season.  The Raiders brought in linebacker Cory Littleton. Littleton played his first 4 seasons with the Rams. The linebacker registered 3.5 sacks and 78 total tackles. Safety Damarious Randall will be entering his first season with the Raiders, after playing last year with Cleveland.  Randall signed a 1 year contract with the Raiders, coming off an 11 game season where he had 45 tackles and no interceptions.

Las Vegas will be losing their leading tackler from last season, as Tahir Whitehead will not return.  Whitehead recorded 108 tackles last season, with 6.5 being tackles for a loss. The Raiders allowed 26.2 points on average last season, which ranked 24th in the league.

The Raiders were not flashy on offense or defense last season, as the Raiders were 24th in points allowed, but also were 24th in points scored, averaging 19.6 per game.  The Raiders went out and signed players heading into the inaugural season in Las Vegas and will be hoping to come out with a bang. The team has tried to make the defense better, after being torched in more than a few games last season.  The quarterback won’t be decided on yet, but you can guarantee with their being a competition, this should draw out the best in both quarterbacks. Running back Josh Jacobs will only get better and I think he improves off of a good rookie campaign last year.  The defense also looks like it will be better. I look for the Raiders to improve off of their 7 win season from a year ago. I’ll take the Raiders to cover this win total and finish at least .500 or better.