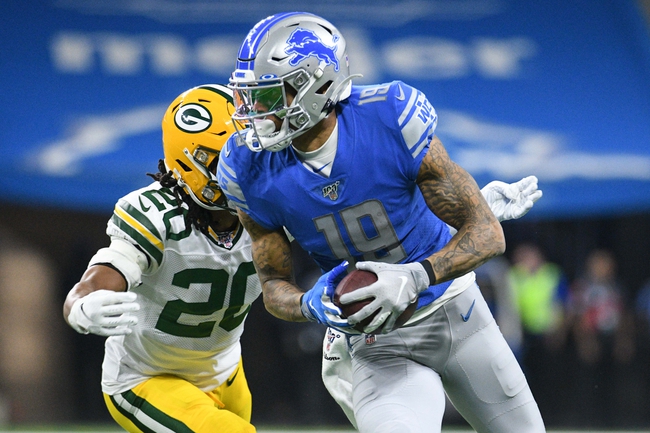 The Detroit Lions are coming off an abysmal 2019 season, finishing the year with a (3-12-1) record.  The Lions got out to a great start, going 2-0-1 through the first 3 games. However, the Lions would lose 9 straight and 12 of their last 13 games.  Let us take a look and see who the Lions have to try and improve from last season. Get NFL Predictions and Picks for Every NFL game at Pick Dawgz.

Quarterback Matthew Stafford got off to a great start to the 2019 season, but was limited to just 8 games, due to an injury.  Stafford passed for 2,499 yards, 19 touchdowns, and 5 interceptions. It was a good start for the quarterback and who knows where the season would have gone.  Running back Kerryon Johnson will be hoping to turn around a 2019 injury riddle season. Johnson played just 8 games, rushing for 403 yards and 3 touchdowns. Kenny Golladay was a bright spot for the Lions last year and will be hooping to mirror that season.  Golladay led the league with 11 touchdowns, while collecting 1,190 yards receiving on 65 receptions. Marvin Jones Jr. hauled in 62 receptions, 779 yards, and 9 touchdowns. The Lions as a team averaged 21.3 points per contest.

Tracy Walker returns for the Lions, after leading the team in tackles last year.  Walker totaled 103 tackles and an interception. Detroit did bring in 7 year veteran Desmond Trufant from Atlanta, hoping his presence will help a defense that struggled in the pass game.  As a team, the defense recorded just 28 sacks and 7 interceptions. Trey Flowers was tied for a team leading 7 sacks in last year’s campaign. Detroit did bring in Nick Williams from Chicago to help get more pressure on opposing quarterbacks.  Williams notched 6 sacks for Chicago last season. As a team, the Lions gave up an average of 26.4 points, which ranked 26th in the league.

The Lions struggled last year, but had key injuries during the season.  Stafford and Johnson both only played 8 games, but by this point Detroit was 2-5-1.  The wheels were starting to fall off before the two got hurt, but the Lions would have snagged a win here and there with them the rest of the season.  The big area of concern is their offensive line. The trio of quarterbacks last season were sacked 43 times during the season. During the 8 games Johnson played, his rush per attempt was just 3.6 yards.  The offensive line had a hard time opening up holes for the running backs, while the team average per rush attempt was 4.1 yards.

The offensive line is nearly the same for the Lions this season, with the exception of right tackle Halapoulivaati Vaitai.  Vaitai came over from Philadelphia. When you look at the opponents on the 2020 schedule for the Lions, I can’t see the Lions being 4 wins better than last season.  The problem isn’t with Detroit having talent, as the Lions have some very good offensive playmakers, but the offensive line hasn’t given the playmakers enough time for the plays to develop.  I think Detroit will average more than their 21.3 points per game from a season ago, but with the offensive line nearly the same, I’m going to take the under.  I just don’t see the Lions being 4 wins better than last season, when looking at their schedule.  The Lions will improve in wins, but will fall short of the projected win total.