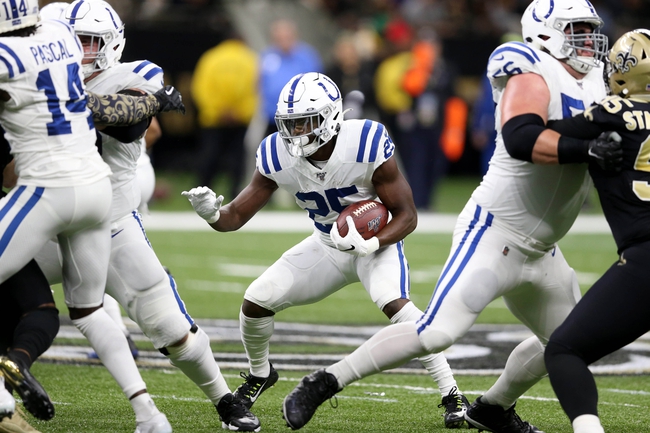 The Indianapolis Colts are hoping to move up the standings in the AFC South for the 2020 season.  The Colts finished 3rd in the AFC South with a record of (7-9). The Colts were 5-2 at one point last year, but had a rough stretch to end the season.  Indianapolis lost 5 of their last 6 games to close out the 2019 season. Let us take a look and see who Indianapolis will be looking at to guide this team to success in 2020. Get NFL Predictions and Picks for Every NFL game at Pick Dawgz.

The Colts signed free agent Philip Rivers, after a long career with the Chargers.  Rivers passed for 4,615 yards, while throwing 23 touchdowns. The 16 year veteran struggled with ball security a season ago, totaling 20 interceptions, while also adding 5 fumbles.  Marlon Mack will be looking to build off a successful season out of the backfield a year ago, after contributing 1,091 yards rushing and scoring 8 touchdowns on the ground. T.Y. Hilton played just 10 games last year, recording 501 yards on 45 receptions, while scoring 5 touchdowns.  Zach Pascal added 5 touchdowns receiving last season.  The Colts offense averaged 22.6 points per game, which was in the middle of the pack las year.

The Colts have one of the best pass rushers over the last so many seasons, in Justin Houston.  Houston collected 11 sacks last year, while forcing 2 fumbles and totaling 44 tackles. DeForest Buckner, the 2016 1st round draft pick added 7.5 sacks last year.  Buckner comes over from San Francisco and should make the Colts pass rush even better. Linebacker Anthony Walker led the team in tackles with 124. Darius Leonard led the team in interceptions, registering 5.

Rivers struggled last season when the Chargers running game wasn’t doing its job.  This year will be different, as the Colts have Marlon Mack who should be able to give the Colts a consistent balance to compliment the passing game.  Hilton did not play a full season last year, I look for him to slide in and become Rivers favorite target from the get go. The Colts bolstered their rush defense, with the addition of Buckner.  Buckner should be able to cause chaos by helping get to the quarterback along with Houston. I look for the Colts to cover the win total this season, as the Colts will be better and even healthier from a season ago.