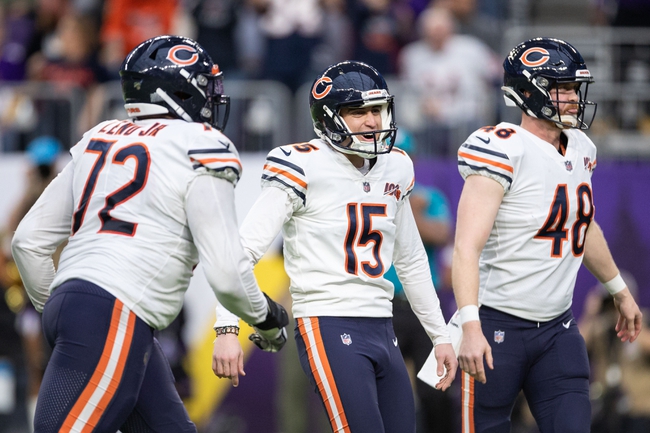 The Chicago Bears are looking to improve off of a 2019 season that saw its ups and downs.  The Bears finished the year going (8-8). The Bears led by a solid defense got out to a 3-1 start, but then lost 4 straight.  The Bears will have a competition for the starting quarterback job this year, after the Bears recent trade. Let us take a look and see who the Bears have on offense and defense for the 2020 season. Get NFL Predictions and Picks for Every NFL game at Pick Dawgz.

The Bears just recently acquired quarterback Nick Foles from Jacksonville and the former Jaguar is set to compete with Mitchell Trubisky.  Foles, who has had some injuries during his career, will be hoping to avoid that obstacle during the weeks leading up to and through the 2020 campaign.  Trubisky passed for 3,138 yards a season ago, while throwing 17 touchdowns. The quarterback did commit 13 turnovers, with 10 being interceptions. One area that the Bears will have to get better at, protecting the quarterback.  Trubisky was sacked 38 times a season ago. David Montgomery returns for his 2nd season, after an impressive rookie season. Montgomery rushed for 889 yards, while totaling 6 touchdowns on the ground. The running back also added 25 receptions.

The Bears coaching staff is hoping wide receiver Allen Robinson II will be able to mirror the 2019 season.  Robinson was 7th in the league with 98 receptions, while registering 1,147 yards receiving. The Penn State product added 7 touchdowns.  The Bears added Jimmy Graham this off season, and will be hoping he will be able to impact an offense that had issues a season ago. Graham had 447 yards receiving and 3 touchdowns for Green Bay last year.

The Bears were kept in most games, thanks to their defense.  Chicago has arguably one of the best defensive players in the league.  Khalil Mack has caused chaos for opposing teams in his career and last year was no different.  Mack collected 8.5 sacks and forced 5 fumbles last season. Danny Trevathan played just 9 games last year, but totaled 70 tackles and had a sack.  Roquan Smith, the other lineback in this trio, registered 101 tackles and recorded 2 sacks.

As a team, the Bears allowed just 18.6 points per game, which ranked 4th in the league.  Chicago did have a nice rush defense a year ago, giving up the 9th fewest rushing yards for the season.

The Bears offense has to be more consistent this season.  Chicago averaged just 17.5 points per game, which ranked 29th in the league.  The offense will need Trubisky or Foles to be consistent rather than hit and miss.  If the Bears want the quarterback position to be more consistent, then the offensive line has to step up and be better.  The o-line can’t afford another season of allowing 38 sacks. The Bears have one of the best line backing trios in the NFL.

Chicago will need Kyle Fuller and Buster Skrine to lead the secondary.  If the Bears can be better than last year in pass coverage, then the Bears could sneak out a win in a game they shouldn’t win.  Ultimately the Bears success will come down to the quarterback. I think the Bears quarterback play should be better than last season, due to the competition.  I’ll side with the Bears to cover this total, as their defense will keep them in games.

Get Premium Picks Start Winning Now »
The pick in this article is the opinion of the writer, not a PickDawgz site consensus.
Previous Pick
Kansas City Chiefs vs. San Francisco 49ers - 2/2/20 NFL Pick, Odds, and Prediction
Next Pick
Arizona Cardinals 2020 Win Total- NFL Picks and Predictions