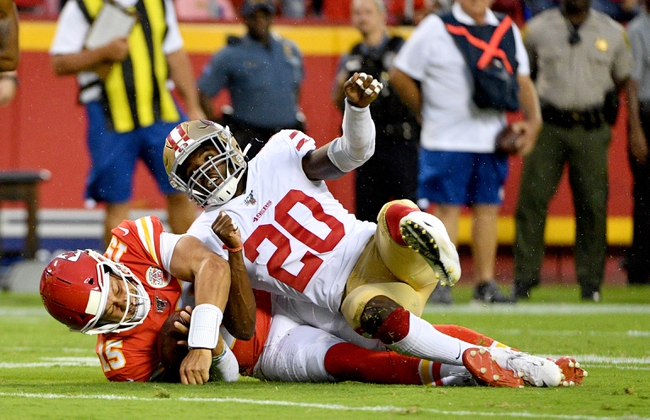 San Francisco finished off a great regular season at 13-3 overall. The 49ers then took out the Vikings 27-10 in the Divisional Round and the Packers 37-20 in the Conference Championship to advance to the final game.

In the win over Green Bay, San Francisco QB Jimmy Garoppolo didn’t have to do much, completing six passes for 77 yards. Raheem Mostert carried the load for the Niners, rushing for 220 yards and four touchdowns on 29 carries.

Over on the Kansas City side, they finished the regular season at 12-4. The Chiefs faced the Texans in the Divisional Round and won 51-31, then dispatched of the Titans in the Conference Championship 35-24.

In the AFC Championship victory, Chiefs QB Patrick Mahomes threw for 294 yards with three scores, and also led the rush with 53 yards and a TD. Sammy Watkins added seven catches for 114 yards and a touchdown in that one also.

The 49ers have taken out two very good NFC teams in the Vikings and Packers on their way to the Super Bowl, and realistically San Francisco was in charge for most of both games thanks to that rushing attack. That’ll be the 49ers’ first go-to weapon here as well.

As for the Chiefs, they’ve exploded on offense during the playoffs, posting a combined 86 points across two games. Kansas City will be passing here, a lot. San Francisco may have to respond in kind, which will make for an interesting game.

This is a pretty tough pick, as evidenced by the thin line. I’m leaning toward Kansas City covering with a high-scoring game in store, but it would probably be more fun to mess around with other prop bets here and just enjoy the show.

Get Premium Picks Start Winning Now »
The pick in this article is the opinion of the writer, not a PickDawgz site consensus.
Previous Pick
NFC vs. AFC - 1/26/20 NFL Pro Bowl Pick, Odds, and Prediction
Next Pick
Chicago Bears 2020 Win Total- NFL Picks and Predictions