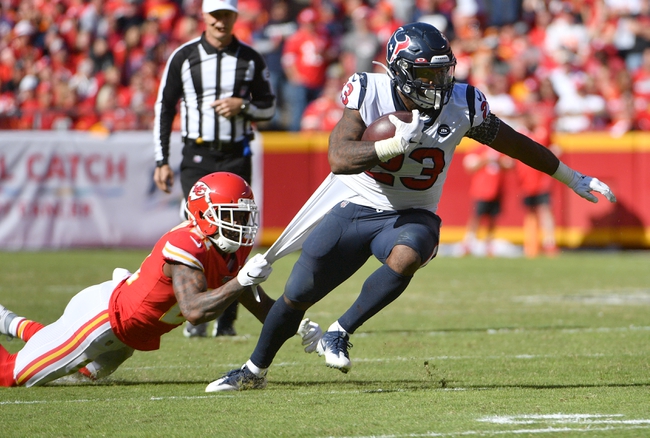 The Houston Texans and the Kansas City Chiefs meet in an AFC Divisional Round playoff matchup from Arrowhead Stadium on Sunday afternoon.

The Houston Texans punched their ticket to the Divisional round with a 22-19 overtime victory over the Buffalo Bills in the Wild Card round. Deshaun Watson threw for 247 yards and a touchdown on 20 of 25 passing while also leading the Texans in rushing with 55 rushing yards and a touchdown. Carlos Hyde added 48 rushing yards and Duke Johnson chipped in 28 rushing yards while DeAndre Hopkins led the Texans with 6 grabs for 90 receiving yards. Kenny Stills and Darren Fells each had 4 catches while the aforementioned Hyde added a touchdown reception as well. Defensively, Benardrick McKinney led the Texans with 10 total tackles including 6 solo tackles while J.J. Watt, Whitney Mercilus and Jacob Martin each had a sack with Martin recovering a fumble as well. As a team, Houston is averaging 362 yards of total offense and 23.6 points per game while allowing 388.3 yards of total defense and 24.1 points per game against this season.

The Kansas City Chiefs come into this game as the #2 seed in the AFC, reaching the playoffs for the 5thstraight season after a 12-4 record and a 4th straight AFC West division title. Patrick Mahomes threw for 4,031 yards, 26 touchdowns and 5 interceptions on 65.9% passing while Damien Williams and LeSean McCoy combined for 963 rushing yards and 9 touchdowns on the ground. Travis Kelce led the Chiefs with 97 catches for 1,229 yards and 5 touchdowns while Tyreek Hill had 860 receiving yards and 7 touchdowns. Defensively, Anthony Hitchens led the Chiefs with 88 total tackles while Tyrann Mathieu had a team-high 4 interceptions and Chris Jones led KC with 9 sacks while Frank Clark came right behind with 8 sacks. As a team, Kansas City is averaging 379.2 yards of total offense and 28.2 points per game while allowing 349.6 yards of total defense and 19.3 points per game against this season.

The Chiefs were solid against the number down the stretch, including a pair of covers as double-digit favorites. However, none of those games were against great offensive teams, as the most impressive name on that list, New England, were a shell of themselves offensively as the season progressed and the rest of those teams were in the bottom half of the league in scoring this season. Houston’s already gone to Arrowhead and won this season, and while I’m not sure it happens in the playoffs, the Texans have shown guts and grit from rallying against Buffalo last week. I also like Deshaun Watson and that Houston offense and the Texans’ pass rush will be sure to give the Chiefs some fits. I’ll take a shot with Houston and the points as I see this being a highly entertaining game as well.