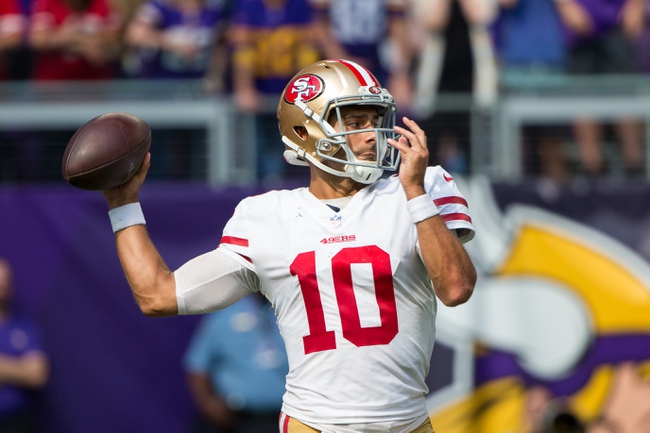 The Minnesota Vikings and the San Francisco 49ers meet in an NFC divisional playoff round matchup from Levi’s Stadium on Saturday afternoon.

The Minnesota Vikings come into this one fresh off of a 26-20 overtime win over New Orleans in their last outing. Kirk Cousins threw for 242 yards and a touchdown on 19 of 31 passing while Dalvin Cook rushed for 94 yards and 2 touchdowns on 28 carries. Adam Thielen led the Vikings with 7 grabs for 129 receiving yards while Cook had 3 catches for 36 yards and Kyle Rudolph had 4 receptions for 31 yards and the game-winning receiving touchdown in OT. Harrison Smith led the Vikings with 11 total tackles including 8 solo tackles while Danielle Hunter and Everson Griffen each had 1.5 sacks and Anthony Harris had an interception. As a team, Minnesota is averaging 353.5 yards of total offense and 25.4 points per game while allowing 341.6 yards of total defense and 18.9 points per game against this season.

The San Francisco 49ers come into this game as the top seed in the NFC after finishing the year with an overall record of 13-3, winning the NFC West division title, their first division title since 2012 and their first playoff berth since 2013. Jimmy Garoppolo threw for 3,978 yards, 27 touchdowns and 13 interceptions on 69.1% passing while Raheem Mostert led San Francisco in rushing with 772 rushing yards and 8 touchdowns. Matt Breida had 623 rushing yards and Tevin Coleman added 544 rushing yards with 6 touchdowns. George Kittle led San Francisco in receiving with 85 catches for 1,053 yards and 5 touchdowns while Deebo Samuel has 57 catches for 802 yards and 3 touchdowns and Emmanuel Sanders has 502 receiving yards and 36 catches. Defensively, Fred Warner leads the 49ers with 118 total tackles including 89 solo tackles while Arik Armstead led the Niners with 10 sacks and Nick Bosa had 9 sacks. DeForest Buckner added 7.5 sacks while Richard Sherman led San Francisco with 3 interceptions. As a team, San Francisco is averaging 381.1 yards of total offense and 29.9 points per game while allowing 281.8 yards of total defense and 19.4 points per game against this season.

San Francisco with a rest advantage is definitely a scary thought, especially at home. However, I was really impressed with what I saw from the Vikings in the wild card game, as Minnesota shut down a really good Saints offense for most of that game while the offense rallied and executed when they were called upon. I think the first game jitters will have subsided for Minnesota, and this is the first time we’re going to see Jimmy Garoppolo in a playoff atmosphere. I’ll take a shot with Minnesota and the points here.